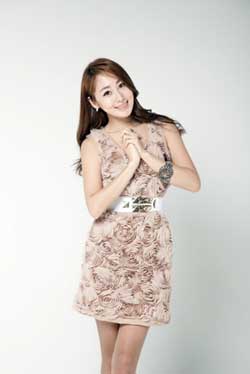 Actress Geum Dan-bi has become the latest Korean celebrity to star in the Korean-Indonesian collaborative drama “I Love You.” The 28-year-old entertainer will join fellow singer Tim on the set of the drama that tells the story of a love that transcends cultural barriers.

Geum will play both Tim’s character’s younger sister and his mother on screen, with one of the characters appearing only in flashbacks. “This is the first time I’ve taken on two roles in one program, so I’m a bit nervous. Nevertheless, it’s a great opportunity for me to learn . . . it will be a lot of fun, no doubt,” said Geum.

Other big names associated with the 30-part drama include famed Indonesian actress Revalina S. Temat and top Indonesian director Indrayanto Kurniawan. It will be shot in tourist hotspots in both nations and be partly financed by the respective tourist boards. The program is a joint venture between the production companies Asia Top Entertainment and Digital Network Art. Airing will begin from July at the prime time slot of 9 p.m. on the broadcast network Indosiar.