Bulls lack a Rose by any other name despite win

Bulls lack a Rose by any other name despite win 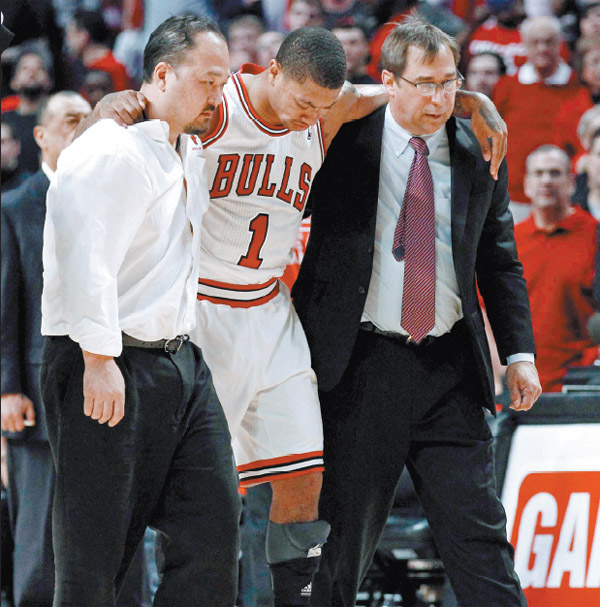 Chicago Bulls’ Derrick Rose, center, is helped off the court after getting hurt during the second half of an NBA Eastern Conference quarterfinal playoff game against the Philadelphia 76ers in Chicago on Saturday. [REUTERS/YONHAP]

CHICAGO - The Chicago Bulls opened the NBA playoffs with a costly victory as they lost reigning most valuable player Derrick Rose to a left knee injury for the remainder of the postseason.

Rose tore his left anterior cruciate ligament in the waning seconds of Chicago’s 103-91 triumph over Philadelphia in the opening game of their best-of-seven Eastern Conference first-round series.

The NBA playoff opener proved to be the farewell for Rose, who is almost certainly assured of missing the London Olympics as well. The Americans will be trying to defend their 2008 gold medal, and Rose would have been a key player.

Rose scored 23 points and added nine rebounds and nine assists in helping the Bulls seize a huge lead late against the 76ers, but coach Tom Thibodeau opted to keep Rose in the lopsided game, unhappy at how the Bulls were playing.

“A guy can get hurt any time. You have to deal with it,” Thibodeau said. “The score was going the other way. We weren’t closing the game out the right way.”

In another East opener, the Miami Heat beat New York 100-67 behind 32 points from LeBron James. The visiting Knicks made 27 turnovers and matched their lowest one-game point total in playoff history.

“I was happy I was able to attack,” said James, who shot 10-of-14 from the field and 11-of-14 from the free throw line. “I’m just trying to be in attack mode throughout these games.”

Already the underdogs, the Knicks also suffered a painful loss as guard Iman Shumpert sustained a torn left knee ligament that will also keep him out the rest of the campaign.

Elsewhere in the East, the Orlando Magic scored the last 11 points en route to an 81-77 victory over the Indiana Pacers at Indianapolis.

The Magic, without three-time defensive player of the year Dwight Howard after his back surgery, nevertheless held the Pacers without a point in the last four minutes of the contest.

But the shocker of the day was the Bulls, whose 50-win season gave them a home court edge throughout the playoffs, losing Rose, who missed 27 games this season with various injuries.

With one minute and 20 seconds left on the clock, Rose planted his feet for a jump shot and his left knee buckled. Rose jumped but passed the ball off to a teammate and used his hands to land carefully, then lowered himself onto the court and rolled onto his back.

Grimacing as he grabbed his knee, Rose lay on the court while being examined by a trainer, then was helped up and off the court to the locker room.

“At first it’s kind of scary for everybody, not just us, the whole city of Chicago,” Bulls starter Richard Hamilton said. “My heart kind of dropped.” He said he backed Thibodeau’s decision to keep Rose on the court in the final minutes.

Rose, who was 9-of-23 from the field, had missed 12 games this season for a groin injury and five games each for back, toe and ankle problems.

The Bulls went 18-9 without him and 32-7 with him in the lineup. Joakim Noah voiced both concern for Rose and determination that his absence won’t derail the Bulls’ playoff bid.

“I consider Derrick a little brother and to see him hurting is never good,” Noah said, then added, “We’re a team, you know?

“We play tough basketball, good defence. Regardless of what happens, we’re a capable group.”

Rose had missed only three games in six years until this season, when the league wedged 66 games into four months after the season was shortened due to a money dispute between club owners and players that was settled last November.