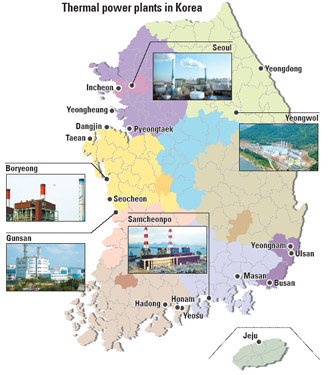 With the government’s decision to open doors to private companies to build thermal power plants as a measure to prevent power shortages, related businesses have been jumping on upcoming projects one after another due to their high profitability.

Conglomerates are vying for inclusion in an energy complex project in Samcheok, Gangwon, where they can construct coal-fired power plants that are low in cost and high in profitability.

With Samsung C&T’s latest challenge to join the project, a total of five companies are competing to get the two tickets to the energy complex.

The Samcheok project is part of the city’s long-term goal to become an energy mecca. The city plans to propose its power generation business to the sixth power supply plan, which will be announced at the end of the year by the Ministry of Knowledge Economy.

Following the path set by STX Energy and Posco Energy last year, Dongbu Group and Tong Yang Group inked MOUs with the city on Tuesday and Samsung C&T plans to clinch the deal next month.

Dongbu is planning to create a clean-energy complex dubbed “Green Samcheok Enertopia,” including an eco-friendly coal-fired power plant with a 6,000-megawatt capacity on a 2-million-square-meter (21.5-million-square-foot) land by 2022.

The group is pushing to build a 1,000-megawatt thermal power plant in Dangjin, South Chungcheong, by 2015. The Dangjin plant will become the first independent power plant based on coal to be built by a private company.

“It is forecast that private companies would see about 50 percent in the sales-to-operating profit rate from selling power made from coal,” Yoon said. He added that the percentage is “outrageous” given that Samsung Electronics recorded 9.7 percent last year.

The price of electricity is determined based on the price of power made from liquefied natural gas (LNG) in the Korean market, the Kepco official explained.

LNG is priced at 132 won ($0.11)per kilowatt-hour in the market, making the consumer price for all types of power 133 won. However, the production cost of power from coal is 67 won, which means the companies will reap in bigger earnings, he said.

Tong Yang Power, a new thermal power subsidiary of Tong Yang Group, is making an all-out effort to build a plant. It plans to construct a 4,000-megawatt plant with an 11 trillion won investment on land where a mine run by Tong Yang Cement is located.

Notably, some engineering and construction (E&C) companies are also making moves to build thermal power plants in order to be included in the government’s power supply plan.

According to the Korea Power Exchange, nine private E&C companies have revealed their intention to build 21 million kilowatts of power plants.

These newcomers are preparing to start the power businesses by joining forces with other firms.

Industry officials say the power plant business is gaining in popularity as a new growth engine for E&C companies that have faced declining orders in their original business area.

“Builders are turning their eyes to coal-fired power plants, because costs to generate power at a thermal power plant are comparatively low, ensuring profitability,” an insider said.

He projected that E&C companies would continue to participate in the power market.

However, he pointed out one of their concerns: “Building a thermal power plant faces opposition from residents in the region, so companies need to make plants greener,” the official said.

Across the country, there are 45 coal-fired power plants and about 10 more plants are being confirmed to be constructed, according to data compiled by KPX.

Power industry officials say, the Knowledge Ministry is mulling over a measure to build additional coal-fired power plants with a total capacity of 22,000 megawatts.

If the measure is included in the sixth power supply plan at the end of the year, Korea will have 11 times greater volume of electricity produced out of coal in comparison with the fifth plan.

The government renews the power plan every two years.

“Worries about blackouts in the summer and winter appear repeatedly as supply is failing to catch up with demand,” an official at the ministry said. The official said the government is considering increasing the number of coal-fired power plants as a practical solution.