‘Third time’s the charm’ for sale of Woori Finance: FSC

‘Third time’s the charm’ for sale of Woori Finance: FSC 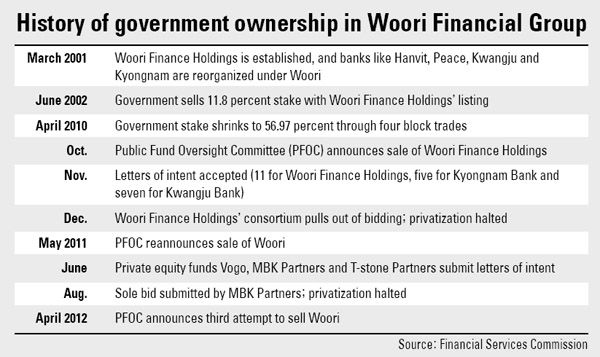 Korea’s financial regulator announced details of a plan to sell its controlling stake in Woori Finance Holdings this year, in what will be the third attempt in just as many years to privatize the nation’s largest financial company by assets.

In a press briefing last Friday, the Financial Services Commission underscored its belief that the “third time’s the charm” when it comes to finding a buyer for its 57 percent stake in Woori Financial Group’s holding company.

“Some meaningful changes since the last time we stopped sales proceedings last August .?.?. are that many uncertainties in the domestic financial environment have been eliminated,” said Kim Yong-beom, secretary general at the Public Fund Oversight Committee, the public-private body overseeing the sale under the auspices of the FSC.

“A financial holding company was newly spun off from the National Agricultural Cooperative Federation, [or Nonghyup,] the Korea Development Bank is pursuing an initial public offering and other companies have cleared debts.

“This led to an environment in which domestic financial holding companies can better focus on M&A prospects to stake out a dominant market position.”

The FSC said sales details will remain largely identical to last year’s foiled attempt from May to August, meaning an open bidding process made up of two stages - preliminary and final.

The deadline for preliminary bids will be July 27 as submissions of letters of intent are skipped “for an efficient process.”

Unlike the 2010 attempt to sell Woori, investors will be required to bid for a minimum 30 percent stake in Woori Finance Holdings for a more complete transfer of management power, without separate bidding for subsidiaries.

There aren’t many prospective buyers that can afford such a hefty price, but the FSC denied that it had particular companies like asset-laden KB Financial Group in mind when drafting this year’s sales plan.

“We believe private equity funds that turned in letters of intent last year can be included [as possible contenders] but there’s no need to restrict the pool [as] we can expect efforts to form new consortia.”