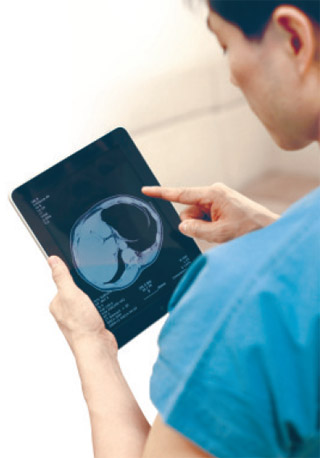 A doctor at Seoul National University Hospital looks at a patient’s X-ray using an app jointly developed with SK Telecom on his iPad. [JoongAng Ilbo]

Smartphones and tablet computers have changed the way we live our daily lives, from how we access the news to how we purchase music. Telecommunication conglomerates in Korea are jumping on the latest smart-device gold mine: the medical market.

KT is preparing to launch a health care company next month specializing in the convergence of medical services and ICT with the Yonsei University health system, which runs Severance Hospital.

This app allows users to monitor the records of all four million patients including X-rays and other high definition images from anywhere, anytime.

“Other than the magnetic resonance imaging (MRI) that needs a huge screen and a few others, most of the patients’ data can be viewed regardless of time or location,” said Choi Jin-wook, head of SNU Hospital’s medical information center.

Cooperation between the hospital and SK Telecom led to the app’s development in just six months. And the results have already changed the way medicine is practiced in the hospital.

Kim Kyung-hwan, the hospital’s cardiothoracic surgeon, was on a business trip outside of Seoul when he was called to the hospital to assist a patient in critical condition. When he arrived on the scene, he already knew much about the situation because he had accessed the app on his smartphone.

“Patients suffering from cardiac or cerebral problems can either die or be disabled for the rest of their lives if treatment is delayed even for a slight moment,” Kim said.

“It is a huge change when doctors rushing to the scene can immediately assess the situation of the patients using their smartphones.”

The assimilation of smart devices into Korean medical services has caught the eyes of overseas hospitals. Officials from Massachusetts General Hospital, Johns Hopkins School of Medicine and the MD Anderson Cancer Center from the United States visited Seoul National University Hospital to learn about the technology and its practical use.

The officials were introduced to apps that allow patients to access medical information on their smartphones while at the hospital in addition to 28 digital kiosks installed that display the same information.

These kiosks offer information on 34 different types of cancer with some 102 videos related to the disease. Patients can also learn how to conduct self-examinations for signs of cancer.

Despite a hefty price of $299, more than 7,000 customers have downloaded the application so far, most of whom are dentists or dental students. It ranked as the most-downloaded app in the Apple App Store’s medical category.

Through the latest 3-D graphic imagery, the app offers video streams on dental treatments including implants.

“Until now, hospitals’ treatments were focused on recuperation after an illness started,” said Lee Chul-hee, CEO of Health Connect and head of SMG-SNU Boramae Medical Center. “But now the direction will be shifted in preemptive treatment before the illness occur using IT technologies.

“As IT changed business industries including finance, the medical service industry will have no other choice but to follow such changes.”