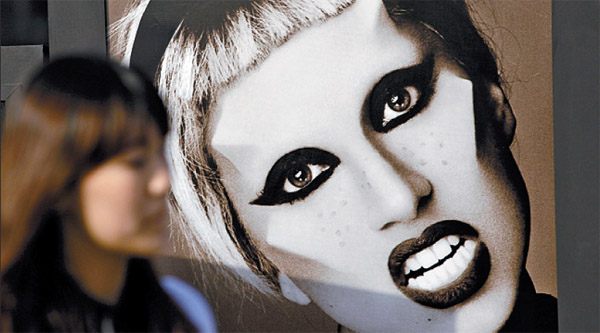 A woman walks past a poster of U.S. pop diva Lady Gaga before her concert at Olympic Stadium in Seoul Friday. [AP/YONHAP]


Controversial pop singer Lady Gaga kicked off her “Born This Way Ball” world tour in Seoul Friday in front of 45,000 fans at Olympic Stadium, despite a ban on those under 18 and protests from Christian groups who insisted that the self-dubbed “Mother Monster” is obscene.

There were concerns that conflict would break out between Christian protestors and fans who gathered outside the stadium early to show off their Gaga-inspired costumes and makeup. About 20 young Christians sang and prayed in front of the venue for an hour before the concert began after 8 p.m., but there were no incidents.

According to the Korea Association of Church Communication, hundreds of Christians gathered at a church near the stadium on Friday and began praying from 7 p.m. until the nearly two-hour concert came to an end.

A man in his mid-30s who would only give his surname, Jeong, did a solo demonstration outside the stadium following similar demonstrations in front of the National Assembly and at the headquarters of Hyundai Card, the concert’s sponsor, on Thursday. He said he was concerned that Lady Gaga’s liberal beliefs on issues like homosexuality would unduly influence Koreans.

“I believe if Korea wants to become one of the advanced countries, it should make efforts to take in healthy and good culture while blocking bad culture,” he said.

The government implemented an adults-only rule, saying the Lady Gaga concert was “harmful for youth.” All members of the audience had their ages checked and were issued wristbands that read “18 above.” There were concerns that the age check would create bottlenecks, but things went smoothly except around 8 p.m., when a quarter of the audience made their way to their seats.

According to Hyundai Card, “1,200 personnel were dispatched to make things more systematic without causing chaos.”

Lady Gaga referred to the ban on those under 18 early on in the concert.

“I was told that your government decided that my show should be 18 or over,” she told the crowd, to enthusiastic applause. “So I’ll make sure it will be.”

The happiest fans were those in the “monster pit,” the area just below the stage. From the stadium’s seats, it was hard to see what was happening on stage, and the two screens that were supposed to show close-ups of the action were overly small. The filming for the screens also rarely showed Lady Gaga herself, concentrating instead on the backup dancers or the castle-like set. As a result, some people left the concert midway because of poor visibility.

“I was sitting in an R-seat, which was the closest to the stage, but I could hardly see Lady Gaga and the screens were too small to show us that craziness going on on stage,” said Kim Ga-yeon, 29. “Moreover, I think she was controlling her performance because it wasn’t as crazy or as obscene as I expected.”

During several numbers, Lady Gaga danced suggestively with both male and female dancers, which was as naughty as the show got. She also used some profanities and urged the crowd to shout them, too.

She was on stage for virtually two hours straight, except for numerous fast costume changes.

Access to the Internet via smartphone slowed to a crawl or stopped altogether due to the large number of people: 45,000 at the concert and another 35,000 at the adjacent baseball stadium.

Lady Gaga thanked the audience on her Twitter page Saturday.

“I could barely sleep last night. It was the second highest attendance of fans in the history of concerts in Korea,” she wrote. “I’m so grateful for all of you .?.?. Last night was like being completely prepared for a moment you could never prepare for.”

Last Thursday, the Christian Council of Korea issued a statement saying, “Lady Gaga openly glamorizes homosexuality and displays grotesque performances while deprecating Christianity.” It threatened Hyundai Card, saying it will have to pay consequences for sponsoring the concert.

“The Christian Council of Korea, which is joined by 12 million Christians and 55,000 churches in Korea, will by all means eradicate such obscenity by holding protests against Hyundai Card as well as a boycott.”

Lady Gaga left Korea Saturday for concerts in Hong Kong beginning May 2 before she will move on to Tokyo, Taipei, Manila, Bangkok, Singapore, Indonesia, New Zealand, Australia and then Europe.