The tide is turning for Jeolla abalone farmers

The tide is turning for Jeolla abalone farmers 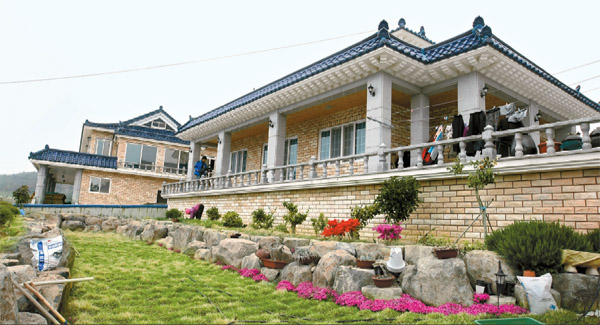 A house owned by abalone farmer Kim Gi-seok, 61, on Nohwa Island in Wando County, South Jeolla. Kim has built a two-story home with money he earned by farming abalone. By Oh Jong-chan


If you go to a village on Nohwa Island in Wando County in South Jeolla, it is not hard to see that the villages here are a bit different from other villages in rural areas.

In front of the island’s county office, a dozen luxury sedans such as SM7 from Renault Samsung; Hyundai’s Grandeur, Equus and Genesis; and a pair of imported sedans including a black Lincoln Continental were parked.

“There are 564 houses whose annual income is more than 100 million won ($88,000) on the island,” said Lee Joo-chan, the head of the Nohwa Island Office told the JoongAng Ilbo.

“They own luxury houses in urban areas of Mokpo and Gwangju, drive their cars off the island and play golf and enjoy shopping on the weekend.”

Lee added that only 2,230 fishing households have earned more than 100 million won each out of 21,890 houses in South Jeolla, meaning that 25 percent of the high income population for the province came from Nohwa Island.

The business that made them rich is abalone, which is considered the “wild ginseng of the sea” among Koreans.

The Nohwa residents first started the abalone farming business in South Jeolla in 1981. Since 2000, the scale of the business has grown along with Korean gourmets’ appetites for the invertebrate. On the island, a total of 713 houses run their own abalone farms.

The Nohwa County office said that two million won worth of abalone can be produced from a 2.2-square-meter cage every two and a half years. Each house running a farm manages about three to four hundred cages each. “It’s tough work,” Nohwa abalone farmer Yoo Sang-soo, 31, told the JoongAng Ilbo.

“It brings me high income but I have to work underwater during the cold of winter.”

The age of farmers on the island is getting younger because more and more members of the young generation who saw their parents earning big money from the business are coming back to the island.

Kim Yoon-cheol, 35, worked as a civil servant in Gwangmyeong, Gyeonggi, until 2008, but decided to come back to his hometown to farm abalone.

He currently raises abalone in 400 cages and purchased an Audi A6 sedan last September. “I produce 400 million won worth of abalone a year,” he said. “About 40 percent of that is my net income.”

The county office said that the total population of the county has increased since 2009. There are currently 700 residents younger than 20, including 560 students - 279 elementary, 143 middle and 138 high school students - on the island.