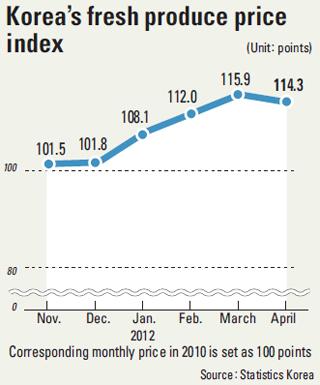 According to a report by Statistics Korea yesterday, the country’s consumer price index rose 2.5 percent in April from a year earlier, slowing from a 2.6 percent on-year gain in March. The index itself, at 106 points, remained unchanged from March.

April’s reading marks the second straight month that Korea’s inflation has been in the 2 percent range.

Core inflation, which excludes volatile oil and food costs, grew a modest 1.8 percent from a year earlier, decelerating slightly from a 1.9 percent on-year increase the previous month. The strong impact of new welfare projects were also felt in April.

However, fresh produce prices proved a stubborn menace to consumers’ pocketbooks by jumping 6.9 percent on-year. Although increases in vegetable prices remained at 5.1 percent on-year, fruits such as apples jumped 12.1 percent overall from a year ago in April.

The Ministry of Strategy and Finance predicted that even though prices will be “largely stable” in the near future, the international price of oil, public utility fees and possible hikes in processed food prices could spark further inflationary pressure.

“We will strengthen efforts to stabilize the supply of farm products such as napa cabbages, pork and chicken, which are unstable,” said the ministry in a statement, adding that it will “refrain from raising public utility fees as much as possible” this year.