A great chance for kids to create the pizza of their dreams on Children’s Day, this cooking class will offer everything from dough to toppings to the budding mini-chefs it is designed to entertain. Parents and children cook together in a class led by head chef Kim Jong-min, who works at the hotel’s Olivo restaurant. The class will be fun and simple enough for young participants to follow along. Once the custom-made pizzas have been baked in Olivo’s pizza oven, they can be eaten straight away or taken home. After the class, participants will be served a special four-course chef’s lunch with appetizer, soup, a main dish and dessert. The pizza class will take place in JW Marriott’s meeting room No. 5 from 10 a.m. on Saturday. It costs 45,000 won per person, excluding tax and service charges. Lunch after the class will be served at Olivo. There is space for just 30 students, so it is essential to reserve in advance.

Saturday: Imperial Palace Seoul offers a hotel-wide special event to celebrate Children’s Day on Saturday. Children will be greeted by face painting in the ground floor lobby, and cotton candy will be on the menu at Manyo, the Japanese restaurant located on the second floor.

Hotel staff will dress up as Pierrot, a pantomime character, and offer puppy, rabbit and flower balloons while giving tours inside the hotel. Instant cameras will also be available so that visiting families can capture special moments at the event to be cherished for a long time to come.

The hotel has prepared 230 special gift sets of characters from “SpongeBob SquarePants” that will be available to children visitors on a first-come, first-served basis.

The buffet Familia will also have a children’s playroom for all customers visiting with young children.

Saturday: The grand ballroom at the Ritz-Carlton will host a magic and bubble gala show from 6 p.m. to 9 p.m. on Saturday. The kid-friendly festivities include a B-boy show, a taekwondo performance and a musical performed in English along with a showing of the Disney animation “Cars 2” and other fun activities for kids. For dinner, hotel chefs will prepare a buffet composed of around 100 delicacies, including king crab, rib eye steak, giant prawn, lamb chops and a “kids corner” hands-on cooking station.

The magic and bubble gala show costs 120,000 won for adults and 60,000 won for children including tax and service charges.

May 12 to May 26: The Chinese restaurant 1881 at the Grand Hyatt Seoul will present a wide variety of northern Chinese appetizers and Sichuan specialties from May 12 to May 26. Menu options during the special event include poached pork rolls with garlic sauce, lamb on a hot stone with cumin and coriander, braised pork, baby abalone in soy sauce, shrimp “Kong Bao style,” and much more.

Two guest chefs have been invited from Shenzhen in China to lead the special promotion for hotel customers. Edgar Chen hails from Chongqing in southwest China and brings more than 14 years of culinary experience to the kitchen. During the promotional period, he will prepare poached pork rolls with garlic sauce, one of his signature dishes. He will be joined by Jordan Liu, who has been with the Grand Hyatt Shenzhen since 2009. Born and raised in Chengdu, the capital of the Sichuan province, Liu specializes in Sichuan cuisine, which is famous for its spicy and unique aromas. Liu will prepare a number of his signature dishes, such as stir-fried green crab with chili, during his visit.

Chicken side dishes are also available. 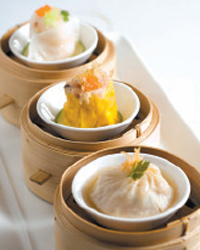 Hong Yuan’s dim sum specialist uses his 26 years of experience to present more than 20 kinds of steamed and fried dishes ready to be enjoyed. Spring rolls, crab meat dumplings and green scallop dumplings are especially recommended by the chef. Special black dumplings are also on the menu. They are open-topped dumplings inspired by the eyes of a phoenix and filled with shrimp dyed black with squid ink.

The weekday dim sum course costs 70,000 won. On the weekend, it is priced at 55,000 won. All prices exclude tax and service charges.