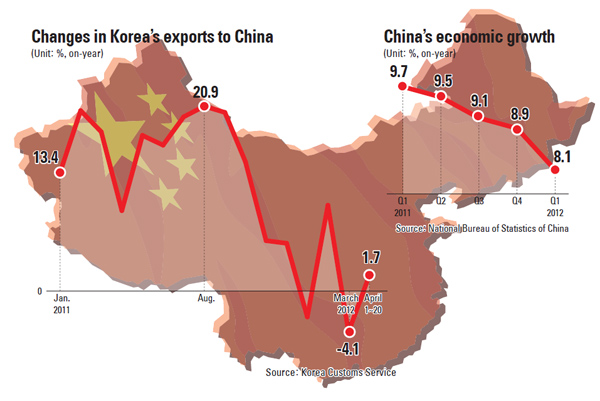 A local construction equipment producer recently decided to analyze China’s economy. It was worried that the building equipment market in the country would fall off, perhaps by 40 percent this year.

In fact, Korea’s machinery exports to China plunged 20.4 percent on-year in March and 9.8 percent in April, according to a report from the Ministry of Knowledge Economy yesterday.

Korea’s exports to its biggest trading partner, which bought 24.2 percent of its exports last year, are losing steam and causing alarm across the economy. In March, total exports to China declined 4.1 percent from a year earlier.

There was a rebound in April, when exports rose 1.7 percent from the previous year, but that is flat compared to the heady growth of 2011, which was 14.9 percent.

The dwindling export performance is due to the slowing of China’s growth rate. With Europe in the middle of a financial crisis, China’s exports to the continent declined and so did Korea’s exports to China.

China recorded a $31.5 billion trade deficit in February, the biggest monthly deficit in 23 years, due to slow economic conditions in the United States and Europe. Its trade balance bounced back to a $5.3 surplus in March but that was attributed to declining imports rather than rising exports.

According to the World Trade Organization, most of the major exporting nations saw their exports grow much slower than in the past. China’s exports only climbed 6.9 percent on-year in February.

The Korean government says the country needs to diversify its exports to other emerging market countries. The Ministry of Strategy and Finance said in a recent report that Korea’s exports to China grew 34.8 percent in 2010, but only increased 14.9 percent in 2011.

“China is trying to increase consumer spending and the government needs a comprehensive strategy to expand shipment of consumer goods such as cosmetics, automobiles and high-end electronics as opposed to relying on using China as a factory,” the report said.

Korea has mostly sold capital goods and components to China rather than consumer goods. China needed Korea’s machinery to manufacture products for export while local companies in China imported parts from Korea and assembled them in China before exporting finished products to developed countries. If China’s exports fall, it will not need new machinery or as many components, and Korea’s exports will inevitably decline.

Analysts say the proportion of Korea’s exports to China is on the decline, albeit slowly. According to the Ministry of Knowledge Economy, China bought 22.4 percent of Korea’s total exports from April 1 through April 20 compared to 23.7 percent in the same period last year.

Meanwhile, Korean companies are struggling in China’s consumer goods market. According to GfK, Korean electronics companies such as Samsung and LG have trouble competing with their Chinese counterparts because Chinese companies such as Haier push down prices. Chinese manufacturers account for 57 percent of the local TV market. “China’s electronic products are much cheaper than those of Korea,” said Song Young-kwan, a senior researcher at Korea Development Institute.

And with wages inexorably rising in China, it is no longer the best place for manufacturing. Samsung moved its mobile handset manufacturing base from China to Vietnam. This also negatively affects Korea’s parts exports to China.

Analysts say, however, there are still many opportunities in terms of exports to China. They say Korean companies should focus more on high-end consumer goods rather than capital goods and look to less developed areas such as western China. There is a growing middle class and their average income is rising.

“China’s role as the world’s factory is changing. It is now becoming the world’s market,” Song said.

“Korean companies have had many obstacles in selling products to China because they did not have a strong presence in the retail sector in that country,” Song said. “It would be meaningful if Korean retailers such as E-Mart make inroads in China.”

“China is a big country. We should not see China as a single region,” Lee said. “The economy in central China is still growing 14 percent to 15 percent annually. It is true that the overall situation is not very promising, but it is not entirely pessimistic.”