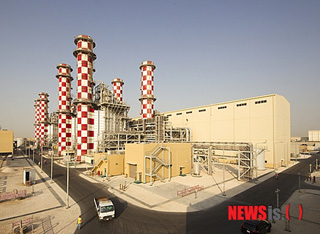 Hyundai Heavy Industries has completed building power and desalination plants in Bahrain, which will help stabilize supplies of both electricity and usable water in the Middle Eastern kingdom.

Korea’s largest heavy industry company said yesterday it held a ceremony to mark the completion of a $1.7 billion complex consisting of a thermal power plant and a desalination plant in Al Dur, 24 miles south of the capital Manama, on Monday night local time. Bahraini King Hamad bin Isa Al Khalifa and high-ranking officials of the government attended the ceremony.

The gas-fired combined-cycle power plant has a capacity of 1,245 megawatts. The desalination plant is capable of producing 218,000 cubic meters (285,133 cubic yards) of usable water a day.

The company said the figures are equivalent to about 40 percent of the country’s total power consumption and 12 percent of daily water use.