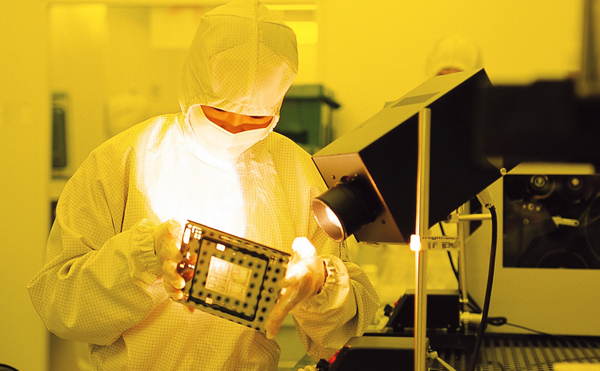 A worker at Samsung Electronics’ semiconductor plant named Nano City in Gyeonggi checks for errors on a photo mask, a type of blueprint for making semiconductors. Provided by the company


Among major global semiconductor companies, only Samsung Electronics posted an operating profit in the first quarter, while rivals including SK Hynix and Micron Technology recorded losses.

Many analysts expect to see the world’s top memory chipmaker maintain its leading position as it has been diversifying its business portfolio to non-memory chips in the wake of the 2008 financial crisis.

The company’s semiconductor business division carved an operating profit of 9.52 percent from total sales of 7.98 trillion won ($7.07 billion) in the first three months of the year.

Samsung kept its position as the industry’s top dog despite plummeting prices of dynamic random-access memory (DRAM) chips by shifting some of its attention to non-memory chips for cell phones and other computing devices, according to Park Gang-ho, an analyst at Daishin Securities.

“Even if one of its divisions sees weaker profits, the company can still enjoy some growth momentum when its other businesses outperform the average,” said Park. “Because other companies have focused heavily on making one type of chip, they don’t have this option.”

“As smartphone processors will continue to expand and develop, Samsung is unlikely to be dislodged from its top spot for a while,” said Park.

The company said last week that it plans to transform many of its existing lines producing memory chips to boost capacity of what is now emerging as its new growth engine.

“As demand for System LSI chips rises, we can keep switching over more lines,” said Kim Myeong-ho, an executive at the company’s semiconductor division. “And this can be done just as easily overseas as at domestic plants.”

The company reformatted two of its flash memory chip-producing lines in Giheung, Gyeonggi, to fit this purpose last year.

Samsung Electronics began its diversification drive after the 2008 credit crunch served as a wake-up call, according to Park of Daishin Securities.

“It can proceed further and faster than other competitors because it continuously invests in establishing new business models, especially when the economy is in a state of flux. But its rivals have not been able to finance this,” Park said.

Such an investment in its basic infrastructure ate into the unit’s sales - which dropped 54 percent on-year in the first quarter - but not enough to prevent it from posting an operating profit.

Samsung Electronics said it expects to gain further momentum later in the year as DRAM chip prices are forecast to see a correction.

DRAM chips account for the bulk, - or 55 percent - of the company’s total memory chip production, while SK Hynix relies on them for 70 percent.

These two companies may have weathered the storm of falling prices, but their drop helped bankrupt Japan’s Elpida, whose departure from the market gives all of its rivals, including Samsung, more of the pie to carve among themselves.

Although the predicted upswing in DRAM prices will add momentum to the market, SK Hynix said it is also looking for ways to diversify. It revealed last week during an investor relations conference call that it is developing a controller chip, a type of non-memory chip that controls the information flow in and out of NAND chips.

The announcement came after SK Chairman Chey Tae-won vowed to make SK Hynix the world’s top chipmaker during the launch of the company at its factory in Icheon, Gyeonggi, in March.