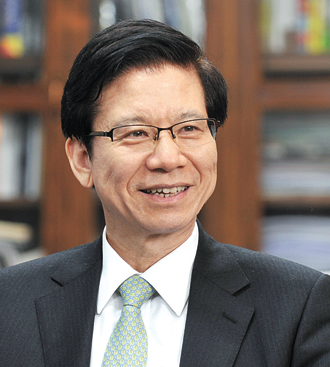 Chung Sang-ki. Representative of the Korean Mission in Taiwan

It’s been 20 years since Korea severed diplomatic ties with Taiwan.

The measure, which Korea had to take simultaneously with the onset of diplomatic relations with China based on Beijing’s “One China” policy, has hurt Taiwan, with the emotional bitterness of Taiwanese expressed in the form of occasional anti-Korean campaigns.

That sense of emotional distance may be set to be reduced, however, with the re-launching of direct flights between Seoul and Taipei. As of Monday, two flights a day have been shuttling from Gimpo, on the outskirts of Seoul, and Taipei’s Songshan.

In an e-mail interview with The JoongAng Sunday, Chung Sang-ki, representative of the Korean Mission in Taiwan, the de facto Korean Embassy, shared similar sentiments. Chung, who has worked hard to restore bilateral ties, said the outlook may be brighter now that the two sides are striving to close the gap.

Q. What do you make of the flight services between Gimpo and Songshan?

A. Korean Air’s first international flight routes, established in 1969, linked Gimpo to Osaka to Songshan to Hong Kong to Bangkok. So the new flights mark the restoration of [this].

Among those foreign nationals visiting Korea, Taiwanese are the world’s fourth-largest, after Japanese, Chinese and Americans. The existing flight route between Incheon, west of Seoul, and Taoyuan, south of Taipei, is too crammed and suffers from a chronic shortage of seats.

The launching of the new flights will cut the traveling time by two hours for those flying between the two capitals. It will also help .?.?. contribute to enhancing personnel exchanges between the two countries.

After ties were cut, we haven’t tried as hard as we could have to maintain a strong relationship with Taiwan in nonpolitical areas.

This contrasts with the efforts made by the U.S. and Japan to maintain good relations with Taiwan after they severed the ties, through regular personnel exchanges of politicians, businessmen, journalists and so forth. Of course, we needed to abide by the “One China” principle in relations with China, but we should have taken heed of improving relations with Taiwan over the past 20 years as well. It is time to change our view of Taiwan and recognize it as our partner in the global economy.

Taiwan does not have a strong presence in the consciousness of the Korean public, but in terms of economic exchanges, the situation is quite different. This implies that bilateral relations will develop considerably in the future.

Last year, Korea exported $18.2 billion worth of goods to Taiwan, which is more than our exports to Oceania or to Africa. In a nutshell, Taiwan is an extremely important trade partner for Korea.

How should Korea look to Taiwan strategically?

Korea and Taiwan are engaged in healthy competition and cooperation at the same time. But the two nations’ medias tend to focus much more on competition, especially the Taiwanese media. They focus on a specific industry in which Taiwan is fiercely competing with Korea and even create slogans like, “Let’s fight against Korea in alliance with Japan.” This phenomenon reflects how they feel victimized by Korea’s unilateral severance of diplomatic ties 20 years ago, as they see this as having dealt a blow to Taiwan’s competitive edge in areas where large Korean conglomerates currently excel.

Taiwan has also signed an Economic Cooperation Framework Agreement [ECFA], tantamount to a free trade agreement, with China, so the country’s strategic value as an outpost to make inroads into China is also rising. Taiwanese exporters are also increasingly showing interest in investing in Korea because of Korea’s respective FTAs with the United States and the European Union.

How do you expect Korea’s relations with Taiwan to proceed?

The launch of the new flight services paves the groundwork for further human and material exchanges in the region. The connection between Gimpo and Songshan is expected to serve as an impetus to develop Korea-Taiwan relations within a regional, cooperative framework.

The two countries need to put the past behind them and look for new forms of mutual cooperation.

As I said earlier, Korea and Taiwan are potential partners that can cooperate in expanding business operations overseas, such as in China.

Some media in Taiwan are stoking the rivalry between Taiwan and Korea, but the media should really refrain from doing so in the interest of better relations. In many respects, Korea-Taiwan relations represent a win-win situation.