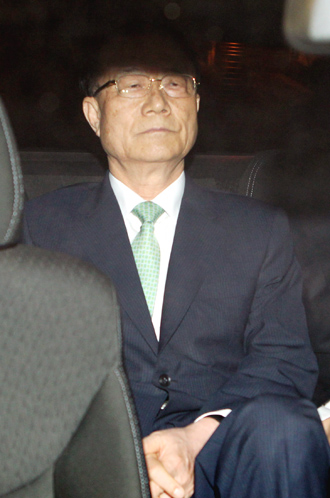 Choi See-joong, 75, former chief of the Korea Communications Commission, was taken to a detention center on Monday night. [YONHAP]

Choi See-joong, a close associate of President Lee Myung-bak, was detained by the prosecution Monday night on charges of receiving hefty bribes from a real estate developer in return for expediting the construction approvals for a real estate development project in southern Seoul.

The Seoul Central District Court issued a pretrial detention warrant late Monday to allow the Supreme Public Prosecutors’ Office to hold the 75-year-old former chief of the Korea Communications Commission through its investigation into the “pi-city” project in Yangjae-dong, southern Seoul.

Choi is accused of receiving at least 800 million won ($708,000) from Lee Jung-bae, the former developer of the 2.4-trillion-won project.

“Lee’s statements about giving bribes to Choi were consistent,” the court said. “There was also a possibility that Choi would destroy evidence as the probe expanded.”

Lee has told the prosecution that he paid bribes to Choi on multiple occasions, many times through a lobbyist. Lee said he had personally delivered 50 million won out of the 800 million won.

Choi was taken to the Seoul Detention Center at around 11:10 p.m.

“Something has gone wrong,” Choi told reporters on his way to the detention facility.

Another of President Lee’s associate, Park Young-joon, will also face questioning by the central investigation unit of the Supreme Public Prosecutors’ Office today over a separate, but related, bribery case.

The former vice minister of knowledge economy was suspected of receiving about 100 million to 200 million won from Lee in return for using his influence to expedite construction approvals for the pi-city project.

The prosecutors also expanded their probe into whether Park received another 300 million won in 2007 from the developer to purchase his home in Yongsan, central Seoul. Park and his family’s bank transactions are being investigated.

He was also accused of laundering the money he allegedly received from the pi-city developer through a friend.

Other former officials of the Seoul Metropolitan Government, who served when President Lee was the mayor, were also questioned by the prosecution.

Kang Cheol-won, former political affairs director of the city government, was investigated Monday over allegations that Park asked him to help with the pi-city project.

President Lee served as the Seoul mayor from 2002 to 2006 before winning the presidential election in 2007.

The pi-city project was supposed to be the country’s largest complex of malls, logistics centers and offices at the site of a former cargo terminal in southern Seoul.

The project began in 2004 but saw little progress due to sluggish issuance of construction permits from the city government. A depressed real estate market and financing troubles further bedeviled the project, and the approval was only made in November 2009.

Lee Jung-bae, the initiator of the project, has claimed that “big shots” in the Lee administration stole his stake in the lucrative project and awarded it to one of the country’s largest builders. Woori Bank, the main creditor, filed for court receivership in August 2010.

In March of this year, Posco Engineering & Construction was named as the new developer.

The media has also uncovered evidence that other Lee associates attended meetings in late 2005 to discuss the fate of the development. Former Senior Secretary to the President for Civil Affairs Lee Jong-chan and Kwak Seung-jun, chairman of the Presidential Council for Future and Vision, attended the meetings, which took place in November and December 2005.

The Seoul Metropolitan Government accepted requests by the JoongAng Ilbo and other media that they disclose information on the urban planning meetings that took place in 2005. Lists of the participants, including experts in urban planning and law, were provided.

“The Seoul city government normally provides explanations on sensitive issues in advance of asking for our advice,” a professor who attended the meetings told the JoongAng Ilbo.

“But at the time, the city just presented the pi-city project issue to us and tried to make us approve it,” he recalled. “I remember many participants of the meetings disagreed.”

A Seoul government official also said then-Seoul Mayor Lee presided over a meeting in September 2005 devoted to the pi-city project. He said Lee gave instructions to handle the development based on the city’s basic plan for urban logistics.

Following the meeting, the city created a plan to allow other facilities, such as a department store, to be built in pi-city, initially intended for a cargo terminal, and Lee endorsed it, the source said.

“And yet, Lee’s instruction was not particularly out of the norm,” the source said, “because the Costco and E-Mart near the pi-city site were developed as multipurpose complexes.”

Others who attended the Seoul City government’s urban planning meetings said the outside experts continued to protest the development of pi-city in 2008, while Oh Se-hoon was mayor. They said they expressed concerns that the project would create serious traffic problems.