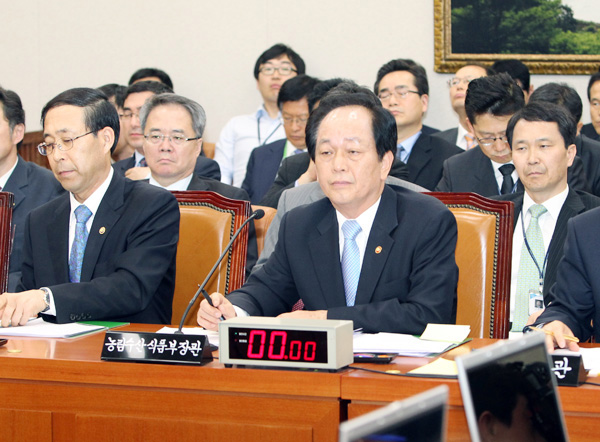 Agriculture Minister Suh Kyu-yong, right, listens to questions from lawmakers at the National Assembly’s Food, Agriculture, Forestry, and Fisheries Committee yesterday about the government’s measures to deal with the safety of U.S. beef imports after a mad cow disease case was reported in California last month. [YONHAP]


The National Assembly’s Food, Agriculture, Forestry and Fisheries Committee adopted yesterday a resolution to halt customs clearance of American beef. The resolution may be voted upon during the Assembly’s voting session scheduled for today.

According to the resolution, “The government should halt customs clearance immediately until the safety of U.S. beef can be confirmed.”

"The government should renegotiate with the US the import of US beef with conditions as strict as those on Canadian beef imports."

It also said the government should come up with special measures to help Korean cattle farmers.

Last Tuesday, a dairy cow in California was discovered to be infected with bovine spongiform encephalopathy (BSE), or mad cow disease. The Ministry for Food, Agriculture, Forestry and Fisheries has stepped up quarantine checks, saying that their response was a sufficient safeguard.

Since Friday, the ministry started checking 50 percent of all U.S. beef coming into the country, up from the normal 3 percent. It also sent a group of government officials and civilians to the U.S. to conduct an on-site investigation into the mad cow case to ease public concern.

According to the Agriculture Ministry, Egypt, Guatemala and Indonesia have partially suspended U.S. beef imports. Taiwan and Chile have enhanced their quarantine checks. Other countries including Canada, Mexico and Japan - all major importers - have not taken any specific measures.

“We will offer accurate and transparent information to our people,” said Agriculture Minister Suh Kyu-yong. He attended the parliamentary meeting held by the Food, Agriculture, Forestry and Fisheries Committee.

Lawmakers from both the ruling and opposition parties have urged the government to suspend imports and said the Lee Myung-bak administration was not keeping its promise made in 2008 that it would halt U.S. beef imports if additional mad cow disease was detected.

“Why isn’t the government keeping its promise it made four years ago?” said ruling party’s spokesman Hwang Young-chul. “Even if the government keeps saying that it’s okay to consume U.S. beef, people will still have doubt and those who have been waiting to pick on the Lee Myung-bak government and the Saenuri Party will take this as an opportunity to berate them.”

Agriculture Minister Suh repeated that Korea only imports beef from cows that are less than 30 months old and the infected dairy cow in California was nearly 11 years old.

Amidst the domestic political wrangling, a team of nine Korean government officials and civilian experts arrived in Washington on Monday to gather information about the mad cow case. They were to visit the U.S. Department of Agriculture yesterday. It is unlikely, however, that the team will be able to visit the dairy farm in California because the farm owner has rejected a visit by the Korean delegation.

According to the agriculture ministry, Korea’s overall beef consumption dropped 8.7 percent in the April 24-29 period compared to April 18-23. Sales of American beef dropped 52 percent while that of Korean beef, or hanwoo, dropped 6.5 percent. Australian beef jumped 2.3 percent over the same period.