North’s submarines go off the radar

North’s submarines go off the radar 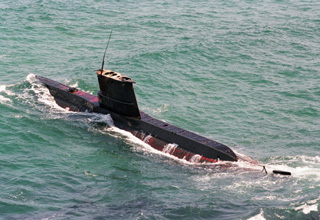 After Pyongyang threatened to wage “special action” against Seoul, a number of North Korean submarines have disappeared, a South Korean government official told the JoongAng Ilbo.

“Eight or nine submarines of the North’s East Sea Fleet are missing from our radar,” the high-ranking South Korean official said on Monday. “We are figuring out whether the submarines are conducting a military drill or an actual mission.

“The missing submarines vary in size, from the 1,000-ton shark-class vessel to a former Soviet Romeo-class one (1,300 ton),” the official added.

Military sources say that North Korea currently owns roughly 70 submarines, including the 1,500-ton Rajin-class vessels or Yugo-class infiltration coastal ships. When North Korean submarines are anchored at base, they can be seen by a satellite.

It’s been more than a week since the North publicly threatened to attack Seoul, saying they will stage special military action in an unprecedented, “peculiar” way.

Police have beefed up security near local broadcasting and newspaper companies, which North Korea has pinpointed as “sources of provocation,” to counter a possible military attack.

In 1996, North Korea sent a spy submarine to the eastern coastal city of Gangneung to collect information on a South Korean Navy installation, but the mission failed.

However, South Korean government officials see the possibility of infiltration by the missing submarines as low.

“North Korea tends to increase military drills and activities of submarines during April and May, in order to check their capabilities after wintertime,” a high-ranking military official told the JoongAng Ilbo.

“We think those missing vessels are not midget submarines for infiltration purposes but medium-sized ones designed for warfare, which means they won’t attempt to penetrate into South Korea.”

An official for the Ministry of Unification told the Korea JoongAng Daily that “North Korea conducts submarine exercises regularly,” implying that the missing ships are part of a regular drill.

“But the timing of their disappearance matters,” the official said. “The South Korean military is closely watching the situation in the North.”