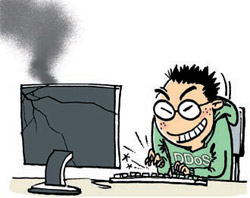 Ulsan police who investigated the problem later said that the corporations’ network systems were somehow accessed by dozens of “zombie PCs” that infected computers with malicious code and controlled the network remotely by hackers.

The police said that a new type of hacking program that is unable to be detected or cured by current antivirus programs was installed in those zombie PCs. The Cyber Crime Investigation Team of the Ulsan Metropolitan Police Agency in South Gyeongsang has been investigating the attack since last month.

The team caught a group of teenage hackers including its primary suspect, a 16-year-old high school boy surnamed Oh, for the distributed denial-of-service (DDoS) attacks that paralyzed the 43 corporations’ Web sites on Monday. The police said that 17 hackers were caught and 15 of them are teenage students living in Seoul.

The police said these hackers are suspected of attacking several corporations’ Web sites since December last year. The boys invented their own hacking programs and sold them on the Internet to show off their computer skills and earn some spending money. The police booked all 17 suspects without detention on Sunday.

The police said Oh and his two classmates threw themselves into inventing a new hacking program for two years and eventually created one last year. Oh and his friends have joined an online hacking club and also analyzed many hacking Web sites run by hackers in the U.S. and China.

“He never learned about computers regularly but his room is filled with computer-related books,” the parents told the police.

The police said the hacking program invented by Oh is stronger than the programs that have been used in other DDos attacks. “One zombie PC that is infected by Oh’s program does the work of two to three normal zombie PCs,” Mun Won-soo, the chief investigator of the investigation team, told the JoongAng Ilbo. “If they just put the targets’ IP addresses into the hacking program, the zombie PCs automatically penetrate the targets’ server and paralyze it.”