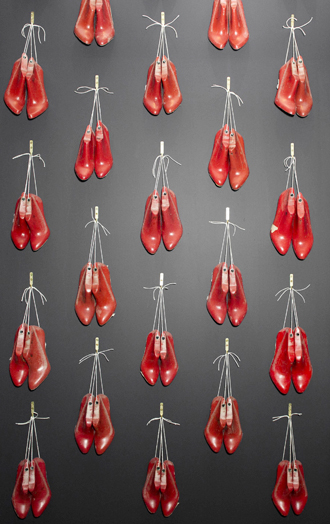 LONDON - Would a red-soled stiletto by any other name than Christian Louboutin look as sweet?

Certainly not for the luxury French shoe designer, who passionately defended his court battle to protect his famous glossy red-soled shoes Monday.

Louboutin was in London to open a museum exhibition marking his brand’s 20th anniversary, talking to reporters about his inspirations and his rise to global success. But he also hit out at fellow French fashion house Yves Saint Laurent and its parent company PPR, whom he is suing for trademark infringement in a U.S. federal appeals court. A panel of judges has yet to issue a decision.

“What PPR does via Yves Saint Laurent is breaking my trademark, which I find incredibly offensive,” Louboutin told The Associated Press.

Louboutin’s lawyers have compared his shoe trademark to a similar one held by Tiffany & Co. for blue boxes - sparking a wider debate on whether a designer can own a color.

The 49-year-old designer, dressed in a red tweed jacket, jeans and steel-toed leather shoes he designed himself, argued that his rivals are wrong to accuse him of trying to monopolize the color red.

“I do not own a color. I own a specific color in a specific place,” he said of his distinctive soles.

A lower U.S. court had rejected a request by Louboutin to stop the sale of YSL shoes that are red all over, including the soles.

Louboutin shoes are one of the world’s most recognizable fashion items, and have been worn by celebrities from Angelina Jolie to French first lady Carla Bruni. The most popular style is five inches high, and his exhibition includes many theatrical boots and shoes with even higher heels.

“Shoes are objects of pleasure,” Louboutin said - though his high heels are famously uncomfortable to wear. Low heels can sometimes be attractive, he said, but comfort is clearly not one of his priorities.

“I am not against comfort, but I don’t like the idea that my shoes are evocative of comfort,” he said.

But he wouldn’t go so far as to endorse foot surgery - nicknamed “Loub jobs” after his shoes - that aims to ease the pain of wearing high heels.

“Frankly, it’s probably not a good idea,” he said.

The retrospective exhibition at London’s Design Museum traces Louboutin’s rise from a teenager fascinated by the feathered costumes of Paris’ cabaret showgirls to his stints at YSL and Chanel to setting up his first boutique in 1991. It also gives a glimpse into his creative process from sketches to execution, as well as including creations designed for a 2008 exhibition with director David Lynch which examines shoes as fetish objects.

Louboutin considers Kate Moss to be his English style icon, but said Queen Elizabeth II would be an interesting and challenging customer.

The retrospective show started on Tuesday and runs to July 9.AP