Ties frayed but not end of road for steelmakers

Ties frayed but not end of road for steelmakers 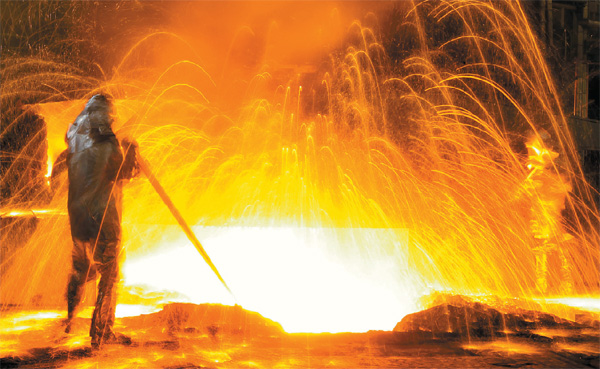 Nippon Steel Corporation (NSC)’s patent infringement lawsuit against Posco has put a dent in a relationship that spans more than 10 years. However, the two top steelmakers in Korea and Japan are expected to find some common ground as cooperation seems inevitable if they are to successfully weather the downturn in the global steel market.

Market observers say the damage has been done and the 12-year-long partnership cannot be fully repaired, but that some form of at least temporary cooperation will be unavoidable.

“Although Posco and NSC are competitors in the market, they are also close partners as they collaborate in securing raw materials and hold stakes in one another,” said Kim Kyung-joong, an analyst at Eugene Investment & Securities.

NSC’s main cash cow has been electrical sheets. As Posco has set itself the goal of increasing sales in this area in 2012, the Japanese firm seems to want to keep its Korean rival in check by hindering its expansion in this segment, Kim said.

The Japanese steel giant filed a complaint with a court in Tokyo on April 19, alleging that Posco infringed its technology patent for electrical steelmaking. It asked the court to impose a ban on Posco’s sale of electrical sheets and sought 1.4 trillion won in damages. NSC submitted a similar suit to a court in the United States on the same day.

According to the Japanese daily Nikkei, NSC has harbored suspicions that Posco stole its technology since the 1990s. All that was lacking was evidence.

The situation changed in 2007 when a former Posco employee, who was on trial at a court in Daegu for allegedly leaking the same technology to a Chinese firm, claimed that it originally came not from Posco, but NSC.

“NSC analyzed the court verdict and found out the name of its former executive who handed over the technology to the Posco employee,” the newspaper reported.

According to the report, NSC asked a court in Tokyo to preserve the evidence last December. The residence of the former NSC employee, who held a high-ranking position, was raided and documents related to the technology patent seized.

However, legal experts point out that the NSC’s suits will have little impact on Posco, even if it is found guilty, because it does not sell electrical sheets in either Japan or the U.S.

Industry insiders suggested the dispute could have been resolved more amicably even as recently as last year, but the death of Posco founder Park Tae-joon killed off any close personal connections between the two companies’ top management.

“What is significant is that the Japanese firm took action shortly after Park, who established ties with NSC in the 1970s, passed away last December,” said an official at the Korea Iron & Steel Association.

On several occasions, Park had contacted former NSC Chairman Yoshihiro Inayama in the early stages of establishing the steel works. Although Inayama was initially reluctant to share the company’s technological know-how, the two built up favorable relations and he helped Park set up his operation in the 1970s.


The Japanese chairman died in 1987. Close links remained in place, but these were effectively dissolved when Park passed away, with no executives left to pick up the legacy and maintain the companies’ close alliance, the official said.

In 1998, Posco and NSC formed an official partnership by acquiring stakes in each other in order to protect their companies from the wave of M&As among global steel manufacturers in the late 1990s and early 2000. At this time, the steel industry in the advanced world was undergoing massive restructuring after the economic recession of the 1980s.

The two steelmakers remain shareholders in each other. Posco holds 3.5 percent of NSC and the Japanese firm owns 5 percent of Posco.