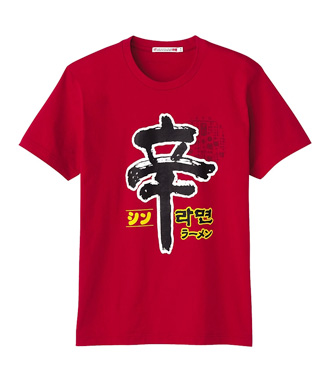 A T-shirt designed with a Shin Ramyun, or instant spicy noodles, motif has been released by Japanese fast fashion retailer Uniqlo in collaboration with Nongshim, Korea’s No. 1 ramen maker said on Tuesday. It is being sold in 13 countries including the United States, Korea, Japan and China. It retails for 24,900 won ($22) in Korea and 1,500 yen in Japan.

According to Nongshim, the T-shirt hit stores last month, one year after Uniqlo first approached the Korean ramen manufacturer about producing apparel linked to the noodle brand to reflect its popularity in Japan. The T-shirt is available in red and features the Chinese character for “spicy” (“Shin”), with the word “ramen” written in both Japanese and Korean. Uniqlo has been rolling out T-shirts with companies like IBM and Microsoft since 2003.