UPP admits its primary was rigged

UPP admits its primary was rigged 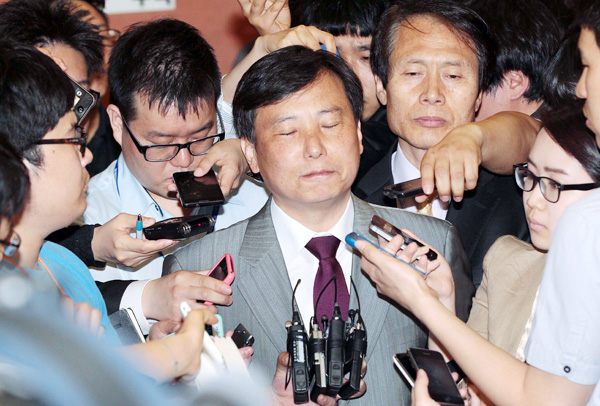 Cho Joon-ho, who led a two-week probe into alleged primary irregularities by the Unified Progressive Party, fields questions from reporters at the National Assembly in Seoul, yesterday. By Oh Jong-taek

The party’s internal investigation team leader convened a press conference yesterday and said the management of the primary held in March was shoddy and some party members skewed its outcome.

“We concluded the election was lax and rigged overall, caused by shoddy voting management,” Cho Joon-ho told reporters. “We can’t trust the outcome.”

All party members could vote in one of three ways: in person at a polling station, via the party’s Web site or through a unique mobile phone canvassing method.

There were irregularities in both the online voting and the voting at polling stations, Cho said.

The manager of the online voting was ordered to let down the safeguards, Cho said, and some votes were received from the same IP addresses.

At about 200 polling stations across the country, Cho said, some ballots had suspiciously similar handwriting while others lacked the signatures of election observers. Some polling station managers distributed multiple ballots to individual voters. Some voters voted after the polls were supposed to be closed; unregistered people voted, too.

“We judged that the proportional representative primary doesn’t have any credibility or legitimacy and we need to take a firm step against the fraudulent votes,” Cho said. “We should suggest countermeasures to prevent further vote-rigging and reform the party.”

Created in December 2011, the opposition party has postured itself as ethically clean. A rift is now emerging over who should take the responsibility for the rigged primary and whether the six elected proportional candidates should step down.

The NL group is suspected of leading the rigging because two of the elected proportional candidates are from the group. Three of the others are outside figures and one is a non-NL member.

Non-NL members are urging the group to take responsibility for the election fraud and leave the party’s inner circle.

Who should resign among the three chairmen of the party is also a problem. Speculation is rising that Lee Jung-hee, an NL member, will probably step down.

The rival Saenuri Party and political commentators lambasted the UPP.

“All of the party leadership should resign and so should the elected proportional candidates,” Lee Sang-il, the Saenuri Party’s spokesman, said in a statement yesterday.

“The NL group is trying to cover up the case by merely demanding Chairwoman Lee to step down,” Shin Yul, a politics professor at Myongji University, told the Korea JoongAng Daily. “Unless the NL group takes full responsibility and stops controlling the party, the UPP could be split up or even dissolved.”