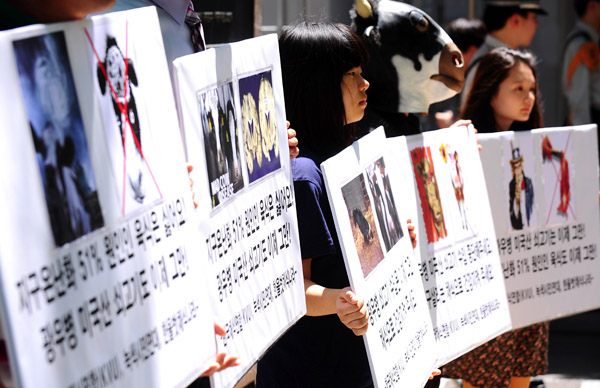 Members of local environmental civic groups stage a campaign urging the government to suspend U.S.-beef imports and encouraging citizens to adopt a vegetarian diet near the Central Government Complex in central Seoul, yesterday.[NEWSIS]


AMES, Iowa - After welcoming the Korean delegation that is currently visiting the United States to check on the recent confirmed case of mad cow disease in California, John Clifford, chief veterinarian at the U.S. Department of Agriculture (USDA), yesterday reassured that its food supply was safe and encouraged Korean consumers to recognize the entire body of evidence.

“I understand individual concern [in Korea],” he told reporters after meeting the delegation at the Agriculture Department’s Animal and Plant Health Inspection Service in Maryland. “But I think you need to look at the body of evidence .?.?. We [the U.S.] know how to protect the food supply.”

It is the first comment made by Clifford after last week when he made an official announcement representing the U.S. government that a nearly 11-year-old dairy cow in California has been infected with bovine spongiform encephalopathy (BSE), or mad cow disease. The latest discovery was the first outbreak in six years and the country’s fourth case as a whole.

“It’s very important that we be able to discuss with them [the Korean delegation] this very rare occurrence of a finding of atypical BSE in the U.S. and to ensure the Korean people as well as our own folks the safety of our food supply,” Clifford said.

The U.S. official explained that the country’s food supply system has three basic approaches, including its surveillance program, feed ban and the specified risk material removal during slaughter. He said, “[I]t’s the whole of these three things that really protects our nation’s food supply and the health of our animal population, which is very healthy by the way.”

Regarding the latest BSE, he also confirmed once again that the case found was a very rare “atypical” case of mad cow disease.

According to the USDA, BSE as a whole is on the decline internationally. Last year, there were 29 cases of BSE worldwide, whereas in 1992, at the height of BSE, there were thousands of cases that are still being determined and found in the United Kingdom. Clifford said the decrease is because “we know how to effectively control BSE through an effective feed ban and protect human health through the removal of specified risk materials.”

The Korean delegation’s meeting with Clifford came on the second day of their 10-day visit. The delegation arrived in Washington on Monday in response to growing concerns among the Korean public over U.S.-beef consumption. The Korean government has also been receiving mounting pressure from the public as well as the political circle to halt U.S.-beef imports following the discovery of a BSE-infected dairy cow in California. The government, however, hasn’t halted customs clearance but rather strengthened quarantine inspections, checking 50 percent of all U.S. beef, up from the initial 3 percent.

The delegation - led by Joo E-suk, head of the Korean Agriculture Ministry’s inspection team - visited the Animal and Plant Health Inspection Service in Maryland on Tuesday and on Wednesday, visited the National Veterinary Services Laboratories located in Ames, Iowa. The delegation, however, will not be able to visit the actual Californian farm where the mad cow disease was discovered.

“We will not actually be going to this specific dairy in question, but that is because of the confidentiality issues that we have in the U.S., where we do not release, not in this case or any other case, .?.?. the name of the producer or the farm location, for that matter,” Clifford said. Joo, head of the inspection team, however, said, “[W]e [the delegation] are still negotiating [with the U.S. government] the matter of visiting the Californian farm.”

The Ministry for Food, Agriculture, Forestry and Fisheries also held its daily briefing yesterday in Gwacheon, Gyeonggi, and said, “[T]he Korean government is in negotiations [with the U.S.] so that the delegation will be able to visit the farm and if not, at least be able to meet the farm owner.”

Pressure on the government to halt customs clearance on U.S. beef seems to be growing, however. Civic groups and liberal politicians held a candlelight vigil yesterday evening near Cheonggye Plaza in central Seoul to commemorate the first 2008 protest that took place on the same day four years ago.