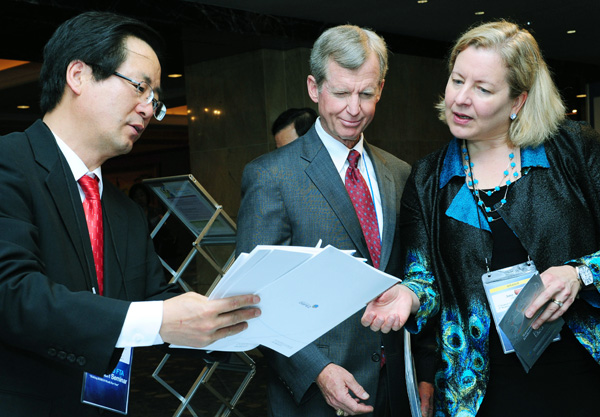 
Regulatory transparency would help minimize investor-state disputes that arise within the framework of the Korea-U.S. free trade agreement, panelists said during a seminar in Seoul yesterday.

They also explained how to verify the rules of origin so companies can benefit from preferential treatment and tariff cuts mapped out by the Korus FTA.

“The United Nations Conference on Trade and Development [Unctad] acknowledges the effectiveness of the ombudsman system in providing aftercare services to foreign investors to minimize or prevent potential investor-state disputes,” said Ahn Choong-yong, chairman of the government’s Regulatory Reform Committee. He was speaking at the Korus FTA Utilization Seminar, which was held at Lotte Hotel.

Unpredictable regulatory changes have been one of the biggest complaints from the foreign business community in Korea.

Under the terms of the new trade pact, the government is required to give the public at least 40 days’ advance notice before changes in trade policies are publicly commented on so that interested parties can prepare effectively. For changes related to the pharmaceutical sector, the threshold is 60 days. Previously, it stood at only 20.

Moreover, such public notices must be released on the official gazette or home page of the related government office.

At yesterday’s meeting, Natalie Hanson, an international trade specialist with the U.S. Customs and Border Protection, also spoke of the importance of the rules of origin.

“A good must be more than a product of Korea and it must meet preferential rule of origin to receive preferential tariff treatment,” Hanson said.

Jay Eizenstat, a partner at McDermott Will & Emory LLP, focuses on U.S. and World Trade Organization trade law and policy. He said importers and exporters can utilize the rules of origin, and gave examples of different formulas for how certain products made of components with different origins can apply for tariff preferential rules.

On the question of whether tariffs will be imposed on products that transit through a third country, Eizenstat said this would have no bearing on changing their eligibility.

For a certain product to be considered as having originated in Korea, he said goods must be wholly obtained or produced in its territory.

“As long as the product is made in the United States and transited through a third country, provided that nothing is done to the good, the product is subject to preferential treatment,” he continued.

Often, products are made from components of varying origins. Any materials that did not originate in either Korea or the U.S. must have their tariff classification changed to satisfy so-called regional value content requirements, he added.

During the seminar, a local customs broker drew attention to the complexity of some of the FTA’s rules pertaining to customs duties.

“The tax rules are so complex that even professionals do not understand them. This hinders companies from benefiting from the FTA,” he said.