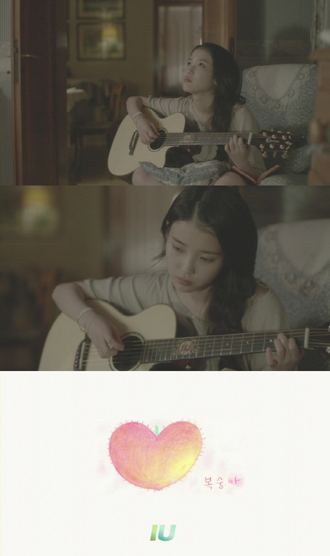 On May 3, a day ahead of the official release of IU’s new single, “Peach,” a teaser video was made available on Loen Entertainment’s official YouTube channel.

Also uploaded on various online music Web sites, the video shows IU strumming along to her self-composed song dressed in casual attire and free of make-up. In the final scene, a picture of a peach, drawn by IU, is visible.

A day before the video’s release, Jo Young-chul, the producer of IU’s album, said, “If lU’s last self-composed song could be described as gloomy, then this song would be classified as an upbeat song.”

Jo commented via his Twitter that the new song reveals a personal side of the young star and he said that the song prompted him to wonder if she was currently seeing someone.