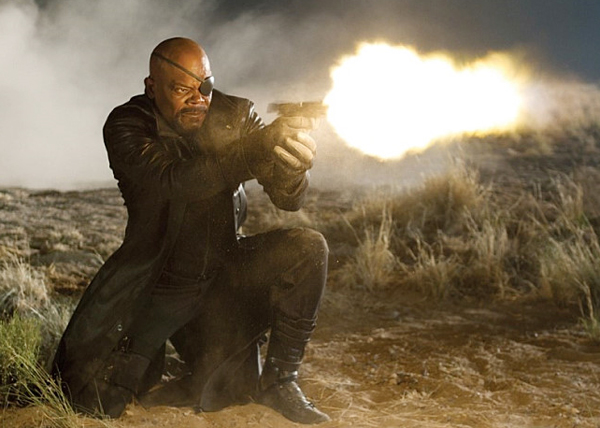 LOS ANGELES - After popping up in cameos during the credits of Marvel films as the authoritative, eye-patch-wearing Nick Fury, Samuel L. Jackson steps fully into his role as the head of peacekeeping agency S.H.I.E.L.D. in “The Avengers.’’

He assembles the super crew of Iron Man, Thor, Captain America, Black Widow, the Incredible Hulk and Hawkeye as part of his “Avengers Initiative’’ to help fight Thor’s brother, Loki, who threatens to wipe out humanity. The film hits U.S. theaters Friday.

“It’s great to stand there and look around and go, ‘OK, these guys are actually here, so we do have the Avengers,’’’ Jackson said during a recent interview. “[Director and writer] Joss [Whedon] is so savvy about the genre and how to flesh characters out, so it’s not just a set-piece fest of stuff blowing up and people chasing each other. ... There’s sadness, there’s joy, there’s fear, there’s all this stuff that goes into making this film that makes it sort of special, way more special than it could have been.’’

Jackson will reprise his character in the next “Captain America’’ film, which starts shooting in January, but he’s unsure of Nick Fury’s fate beyond that. Could his origin story be in the works?

The 63-year-old actor took a break from working with Quentin Tarantino on “Django Unchained’’ to promote “The Avengers.’’ And while he stayed mum on the project (“It’s another non-disclosure thing’’), he said he has no problem shifting gears from Tarantino’s dramatic Western tale to the superhero world.

“It’s like this: When I go to work in the morning, I’m this guy. And when I come out of the makeup trailer and I have a big scar on my face and a patch on my eye and I’ve got a whole goatee, I’m a whole new person. I don’t even have to think about it,’’ he said. AP