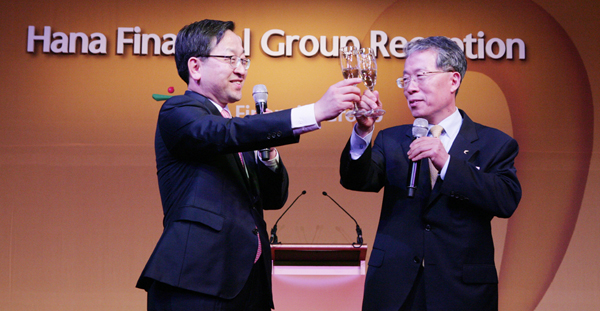 Hana Bank President Kim Jong-jun, left, and KEB President Yun Yong-ro fete the merging of the two banks at a reception held on the sidelines of the Asia Development Bank meeting in Manila, yesterday. Provided by the company


MANILA - Hana Financial Group, which recently merged with Korea Exchange Bank, has set its sight on expanding its presence in the Philippines by further increasing the number of its operations there in the near future.

“We could open as many as six branches; three in locations that we desire, and three in areas designated by the Philippine government,” Hana Financial Group Chairman Kim Jung-tai said on Wednesday evening.

He was in Manila with Hana Bank President Kim Jong-jun and Korea Exchange Bank President Yun Yong-ro to attend the annual Asia Development Bank meeting and promote the union of the two Korean banking firms for the first time on the international stage.

Kim Jung-tai told Korean reporters that the possibilities in the Philippines are without bound.

He added that the country is a key strategic location for Hana Financial and KEB as they bid to create a regional network in Southeast Asia. The group will consider M&A deals with any attractive local banks in the market as this would be more cost effective than building up its own operations there, he said.

“Tapping the local retail market while operating in the Philippine peso has huge potential,” Kim said. “Overseas Filipinos send about $25 billion back to the Philippines each year, equivalent to 16 percent of the country’s GDP.”

He said KEB’s marketing and sales operations were effectively put on hold while it was owned by the U.S. equity firm Lone Star Funds, which eventually sold the bank off under a dark cloud in the form of criticism that it engaged in huge profit-taking, but that these were now back on track.

“From now on we plan to be much more aggressive in this area,” Kim said. “The Philippines will be another success story for KEB.”

KEB is the only Korean bank that has a branch office here as local law limits to 14, the number of foreign banks allowed to operate.

“The country has a population of more than 100 million people, huge potential and abundant resources, even though it has struggled [economically] in the past,” said Yun of KEB.

Although the Philippines’ economic growth slowed to 3.8 percent last year from 7.6 percent in 2010, it is expected to modestly recover to between 4 and 5 percent by the end of this year.

But Kim Jong-jun said the bank has its sights set even further afield. “We also need to strengthen our banking operations in North and South America,” he said.

Earlier this year, Hana Financial officially bought a majority stake of KEB. As a result, the group’s operations have grown from nine to 22 countries. At the reception, Kim Jung-tai said it has targeted joining the ranks of world’s top 50 financial institutions by 2015.

“As Hana Financial Group welcomed KEB as our new family member in February, we have entered a turning point in making a new leap forward,” he said. “We now have the foundation in place to achieve our dream of joining the global top 50.”

“Korean banks have no choice but to expand overseas as the domestic market is oversaturated,” Yun said.

The KEB president also noted that while KEB still has a lead in overseas markets compared to its Korean competitors, Shinhan and Woori banks have been rapidly closing the gap.

“Shinhan will soon get approval to operate in Chennai, India, where Hyundai Motor, a main client of KEB, has a plant,” Yun said.

“KEB will open up a branch office in Abu Dhabi, which will be a new first for a Korean bank.”

He said foreign banks were more of a threat than domestic rivals due to their growing attraction for Korean companies going global, which are increasingly switching to banks like Standard Chartered Bank and HSBC to benefit from their huge overseas networks.

“We can’t rely on feelings of patriotic pride any more when it comes to doing business. Our challenge is to win back Korean companies that are operating overseas by offering better and more competitive products and services,” Yun said.