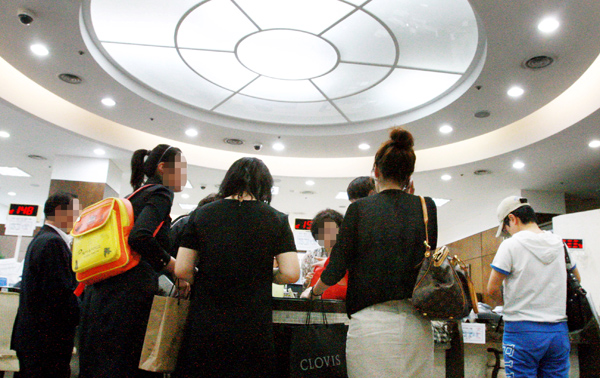 Customers flock to a savings bank branch in central Seoul yesterday to withdraw their money. The industry fears that three savings banks could be suspended as early as Sunday as regulators get ready to announce the fates of five debt-laden savings banks. By Kim Kyung-bin


Korea’s beleaguered savings bank sector could be entering a new crisis as regulators get ready to announce the fates of five debt-laden savings banks that survived the shutdowns of last September.

Meanwhile, reports have said that regulators have unofficially passed on to prosecutors evidence of wrongdoing at four of the banks, raising the prospect that investigations will reveal even more rot in an industry that saw nearly 50 executives, officials and politicians indicted after formal investigations began last September.

Yesterday, the local media reported that the Financial Supervisory Service unofficially gave evidence to prosecutors pertaining to four out of the roughly 100 remaining savings banks for possible investigation.

To avoid bank runs, the FSS and prosecutors have not publicly disclosed the names of the four banks that may face prosecution or the three that are rumored to face being closed down. But the names are circulating and runs are likely.

Yesterday afternoon, depositors began pulling their cash from the main branch of Solomon Savings Bank in southern Seoul, as well as others.

Two of the four banks are among the sector’s top five in terms of assets in 2011, and taken together the four banks have more than 10 trillion won ($8.86 billion) in assets and more than 1 million customers. The ramifications of closures will be almost as large as when seven savings banks were suspended, or closed, last September.

Although the FSS and prosecutors separately released statements that there hadn’t been a public, “official” request for an investigation, a representative at the special savings bank investigation team under the Supreme Prosecutor’s Office told the JoongAng Ilbo that information concerning suspicions of wrongdoing at the four saving banks “continue to be passed” to prosecutors, with “the start of the investigation to be determined considering the possibility of damage to depositors and other concerns.”

Meanwhile, regulators are getting ready to announce the fate of five debt-laden savings banks that were spared suspension last September by pledges to turn their balance sheets around. A committee of private experts tasked with evaluating their books is set to meet as soon as this weekend, possibly Sunday.

Although long-expected, the sector could still be rocked if three savings banks are suspended, as the industry fears. According to the Korea Deposit Insurance Corp., there are some 14,000 depositors with deposits exceeding the government-guaranteed amount of 50 million won per person at the five savings banks. If the five banks were closed, it estimates the average loss per customer would be 5.4 million won.