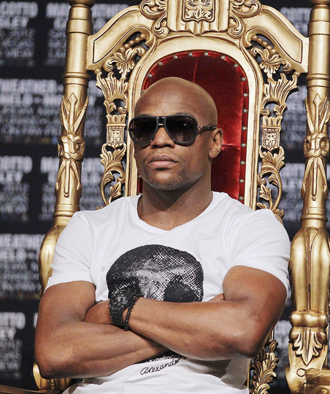 Floyd Mayweather Jr. waits to speak during a news conference on Wednesday in Las Vegas. Mayweather and Miguel Cotto will fight for a super welterweight title on Saturday. [AP/YONHAP]

LAS VEGAS - Floyd Mayweather, Jr. is renowned almost as much for taunting his opponents outside the ring as for dominating them inside the ropes, but he has struck a complimentary tone ahead of Saturday’s fight with Miguel Cotto.

“Miguel is a true warrior, a tough champion, and to go down in the Hall of Fame as one of the best, you have to face the true champions out there,” Mayweather, 42-0 (26 KOs), told reporters on Wednesday.

Cotto, 37-2 (30 KOs), who successfully defended his crown with a 10th-round technical knockout win over Antonio Margarito in December, was also full of praise.

“He’s been a gentleman the whole way with me,” the Puerto Rican said of his opponent. “I’ve been a gentleman with him. That’s the way it should be. You get paid to fight in the ring, not outside the ring.”

The mutual respect reflects the two fighters’ credentials. Mayweather, who won his first title at super featherweight in 1998, is regarded as the world’s best pound-for-pound fighter, with the possible exception of Filipino southpaw Manny Pacquiao.

Cotto, whose first championship came at super lightweight in 2004, has suffered only two defeats in 39 contests while winning titles in three weight divisions.

The two men have been mooted as possible opponents since both were campaigning as super lightweights, but Cotto felt his chances would have been significantly diminished had they met earlier in his career.

“I didn’t think about him because he was a great champion, he was a guy who was above me on all levels,” he said. “But now, we are in the same boat, and the preparation we had in our camp is going to be what gives us the victory on Saturday.”

On paper, the contest matches the peerless speed of Mayweather against the relentless body-punching of Cotto, but each man was at pains to play down his perceived advantages.

Cotto, meanwhile, said he was likely to lose if he focused on just going to Mayweather’s body.

“If you go into a fight with just one plan, to fight a guy like Mayweather, who can punch or who can run, who has skills, you’re going to fail,” he added.

“We have prepared ourselves for more than one plan.”

Mayweather smiled when presented with possible strategies Cotto might follow, pointing out that all of his other opponents had spoken of grand plans for defeating him, none of which came to fruition.

“It looks a lot easier from the outside,” said the American, who improved his perfect professional record to 42-0 by claiming the WBC welterweight title from Victor Ortiz in September.

Cotto, however, expressed a calm confidence about Saturday’s bout, which is scheduled for 12 rounds.