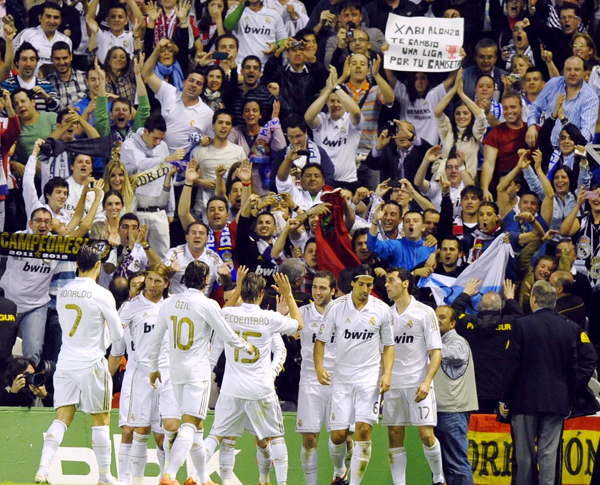 Real Madrid celebrates a goal during their Spanish La Liga football match against Athletic Bilbao at San Mames Stadium in Bilbao on Wednesday. Real won 3-0 and clinched the league title for the first time in four years. [REUTERS/YONHAP]


MADRID - Jose Mourinho promised improved results in his second season at Real Madrid, and the Portuguese coach delivered with a record 32nd Spanish league trophy to put a close to Barcelona’s domestic dominance.

But while Madrid set a record goal total and Mourinho became the first manager to win a seventh league title across four different European leagues, his failure to give Madrid a chance at playing for a 10th European Cup by way of a Champions League final appearance will leave a bittersweet taste hanging over this season’s accomplishment.

Madrid secured the Spanish title with a 3-0 victory at Athletic Bilbao on Wednesday, with Gonzalo Higuain again scoring the goal that clinched the title - just as the Argentina forward did four years ago.

Cristiano Ronaldo led a potent attack that surpassed the record mark of 109 goals set by Madrid 22 years ago, with 115 goals and counting, and two games still to play.

Ronaldo’s 58 goals include 44 in the league, with the Portugal forward still dueling with Barcelona rival Lionel Messi - who leads with 46 - for the new mark.

“No one gifted us anything,’’ Mourinho, always blunt, said Wednesday.

Madrid may not have met expectations in Europe, despite reaching a second straight semifinal, but at least it finally figured out a way to beat Barcelona.

Barcelona had dominated Spain’s fiercest rivalry since coach Pep Guardiola’s arrival in 2008, winning nine of 14 with only a single loss until Madrid’s victory in last month’s “Clasico’’ allowed it to take control of the title race and tilt the balance of power in Spain.

The 2-1 victory at Camp Nou not only stretched Madrid’s lead to seven points, but compounded a miserable week for Barcelona when Chelsea eliminated it from the Champions League semifinal and Guardiola announced his decision to leave the club at the close of the season.

Madrid’s turnaround started in January with a 2-2 Copa del Rey draw at Barcelona, a result that swung the momentum in its favor despite Barcelona winning the series to advance to the Cup final.

Mourinho’s attacking scheme led by Mesut Ozil and Kaka helped the visitors dominate that game as “Los Meringues’’ rallied from a 2-0 deficit to draw and put a dent in the belief of Guardiola’s team, which had won 3-1 at Santiago Bernabeu Stadium in December.

Jolted into believing it could finally compete with its archrival, Madrid gained further confidence as it went on a 15-game winning streak - to tie a 1960-61 team record - after the December loss to establish a 10-point lead over Barcelona by the time the three-time defending champion lost 3-2 in subzero temperatures at Osasuna in March.

The Madrid media was already talking about the Spanish leaders moving 16 points ahead by the time of the season’s second Clasico to inflict further embarrassment on the Catalans, who would get to perform the traditional pasillo - or passage of honor for the champions - at the Camp Nou stadium if they could stretch the advantage.

But Barcelona won all 12 games leading up to last month’s second Clasico, with Mourinho no longer speaking with the Spanish media after a third draw in five rounds saw his team’s advantage cut down to four points.

Madrid showed no fear to win 2-1 at Barcelona on April 20 to all but secure the title and cap its turnaround from the start of the season when it lost to Barcelona in a Spanish Super Cup match that descended into a brawl and is best remembered for Mourinho poking Guardiola’s successor Tito Vilanova in the eye.

The eye poke continued an ugly trend by Mourinho, whose surly behavior and constant conspiracy theories were ultimately unappreciated by fans, who jeered at the coach for the first time following the Copa del Rey loss to Barcelona.

“Madrid has thrown its entire history overboard by electing this woeful style, which did not produce a single benefit,’’ Marca columnist Santi Segurola wrote.