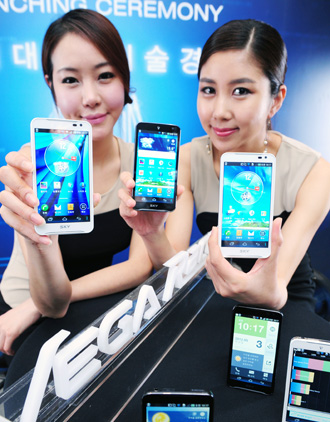 Pantech has unveiled the Vega Racer 2, a smartphone with a long-lasting battery and voice control features that runs on the 4G long-term evolution (LTE) network.

Yesterday’s release by the nation’s third-largest smartphone maker has all the hallmarks of a pre-emptive strike as it came just half a day before Samsung Electronics was due to launch its highly anticipated Galaxy S3 in London.

“Apple and Samsung will unveil their new products soon and we will compete with them using Vega Racer 2,” said Park Byeong-yeop, Pantech’s founder and vice chairman, at the company’s headquarters in Seoul. This is first time in two years Park has personally presented a new smartphone to the press.

“Consumers are satisfied with [smartphones’] fast telecommunication network and wider screens, but they complain about the short battery life,” Park said. “Some say they don’t merit the name ‘smartphone’ if its battery lasts for less than a day. So we had 1,600 researchers working hard to find a way of lengthening the battery usage.”

On a single charge, it can sustain 9.5 hours of talk time and 245 hours of standby while running on an LTE network, outpacing rivals.

“We have already sold over 1.6 million Vega Racer handsets and we think we will sell even more of this model,” Park said.

Industry observers predict Apple and Samsung’s new smartphones will have better battery life than their predecessors.

The firm’s creditors eventually agreed to end Pantech’s five-year workout program in December, just one day after Park threatened to step down later that month in the wake of a dispute over the issue. Park’s gamble paid off and he retained his post.

Vega Racer 2 is the first smartphone equipped with Korean voice-recognition software. It enables users to make calls and send text messages as well as browse the Web via voice commands. Apple’s Siri function does not yet support Korean.