Hard-fought measures leave much to be desired

Hard-fought measures leave much to be desired 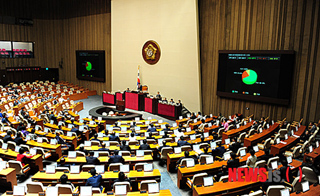 Days before their term ends, the outgoing lawmakers barely managed to pass a bunch of long-debated bills in a last-minute plenary session, but concerns still linger over the shortcomings of the newly introduced measures.

One of the key bills approved Wednesday was the revision to the National Assembly Act, aimed at rooting out violence in the legislative process. The current 18th National Assembly was marred with many violent melees. Lawmakers at various points used a hammer, a chain saw and a tear gas canister to disrupt proceedings.

A fast-tracked bill will automatically advance to a main voting session after spending 180 days on a standing committee or 90 days on the Legislative and Judiciary Committee.

While the lawmakers agreed with the intention of the anti-brawl measures, some worry that the steps were too rigid and that the legislative operation could be slowed down.

“By introducing the three-fifths rule, the National Assembly will officially fall into a vegetative state,” Representative Shim Jae-chul of the Saenuri Party argued. Other ruling party lawmakers including Kim Young-sun also agreed.

In the next National Assembly, no party controls an overwhelming majority. The Saenuri won 152 in the 300-member legislature, but two recently quit. The three-fifths standard, therefore, will be difficult to meet for any bill to be designated as a fast-track item, the Saenuri lawmakers argued.

“The basic framework of operating our legislature is drastically changed,” Representative Chung Ui-hwa, the acting National Assembly speaker, said shortly after the measures were approved. “We fear that the next Assembly will be an inactive, vegetable legislature.”

Others showed concerns about the procedure. “The outgoing lawmakers created the new rules of the game for their successors,” said Kim Jun-seok, a political science professor of Dongguk University. “That is a problem.”

Challenges also remained over the measures approved Wednesday. The National Assembly passed the measure to allow over-the-counter drugs to be sold outside pharmacies, allowing the public to have access to medicine such as cold and digestive pills at supermarkets and convenience stores.

With the legislation, 20 over-the-counter drugs will be sold at 24-hour convenience stores starting in November, but the measure won’t likely benefit the population living in rural areas. Of the 1,416 eups and myeons - small villages - 655 have no pharmacies, not to mention convenience stores.

The Ministry of Health and Welfare said it will come up with other measures to give the public around-the-clock access to the drugs by allowing public health centers to supply the pills at night or install vending machines. Concerns about misuse of cold medicine also remain unresolved.

The National Assembly also revised the law governing emergency medical treatment, adding momentum to the efforts to build more trauma centers. The ministry said it will spend 200 billion won ($177 million) to build 17 more trauma centers around the nation, including two facilities to be completed next year.

This year, the ministry will receive applications from hospitals to select five new trauma facilities. Each selected hospital will receive 8 billion won to improve its trauma center, and separately funded, up to 2.7 billion won will be provided to recruit more trauma surgeons.