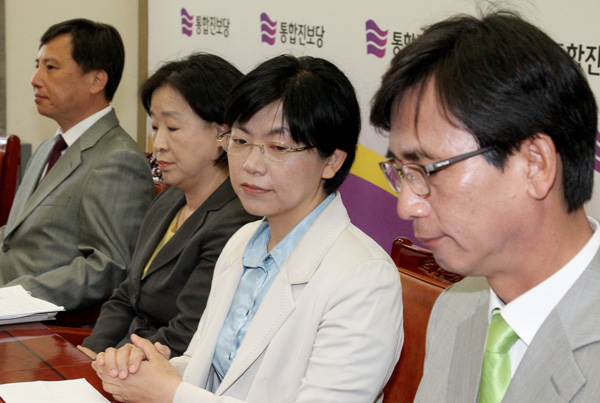 From right, Rhyu Si-min, Lee Jung-hee and Sim Sang-jeong, co-chairs of the opposition Unified Progressive Party, attend a party leaders’ meeting yesterday at the National Assembly to discuss the internal report on the primary rigging and the party’s response to the scandal it has spawned. [YONHAP]


Facing a public uproar over its admission that a primary for National Assembly representatives was rigged, the Unified Progressive Party leadership apologized, but a rift was obvious over who will bear blame.

On Wednesday, the party announced that a March primary to elect the party’s six proportional representatives was rigged, with people allowed to vote multiple times both online and at polling stations.

The three co-chairs of the opposition party - Lee Jung-hee, Rhyu Si-min, and Sim Sang-jeong - held a press conference yesterday and said they regret the shoddy management that led to the rigging.

“Lax management of online voting and polling stations is a serious fault,” Lee said. “We apologize to all people in the country and the party members.”

The leadership uploaded the entire report by their internal investigation team on the party’s official Web site.

According to the report, a slew of fraudulent votes were found from polling stations. For the online voting, the manager let down safeguards and numerous votes arrived from the same IP addresses.

However, the three leaders had different ideas of how to go forward, especially on the issue of whether the elected proportional representatives should surrender their seats in the National Assembly.

Political sources told the JoongAng Ilbo yesterday that Lee is proposing to settle the scandal by resigning. Rhyu and Sim are saying all six proportional representatives should step down.

While Chairwoman Lee is a member of the so-called NL (National Liberalization) faction of the party, composed of former student activists from the 1970s and 1980s who support North Korea’s juche (self-reliance) ideology, Rhyu and Sim are non-NL members. The NL faction is the majority of the party.

Two of the proportional representatives elected in the rigged primary are NL members.

Chairwoman Lee also raised questions about the party’s internal investigation of the primary and asked for a new investigation before deciding whether the lawmakers should step down, raising suspicions that she is trying to protect the two NL-faction proportional lawmakers.

“We can’t say it was vote-rigging based on this report,” Lee said at a party meeting, a political source told JoongAng Ilbo yesterday. “We need to conduct a more specific investigation.”

At the press conference, Lee was also cautious in saying the election was manipulated. She refrained from directly mentioning the election was rigged, merely admitting to “lax” and “shoddy” management. But Rhyu and Sim believed the results of the probe.

Prosecutors yesterday launched a probe into the UPP primary after a conservative civic group called Right Korea filed an accusation against the party, saying it violated the election law. The Seoul Central District Prosecutors’ Office said it will summon as early as next week some party members who managed the election.

The party’s leaders opposed a prosecution investigation into the primary. “We have our own ability to revamp and reform ourselves,” they said in a joint statement issued yesterday. “Prosecutors are attempting to investigate our party in the name of accusations filed by a ghost conservative civic group, which is apparently acting out of political purposes. We demand the prosecution stop investigating the UPP immediately.”