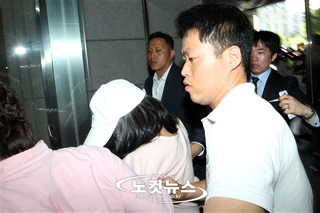 Thoughtless conversations exchanged through instant messages between members of a chat room led members of the group to kill another member, police said.

The Seodaemun Police Precinct in Seoul filed warrants to detain three teenagers who were caught earlier this week for killing a 20-year-old college student surnamed Kim. The police also have arrested the victim’s ex-girlfriend surnamed Park, 21, and booked her without detention on suspicion of not reporting the crime.

On Wednesday, the police arrested an 18-year-old boy surnamed Yoon around 7:30 a.m. at his house in Uijeongbu, Gyeonggi, for murder after arresting a 16-year-old boy surnamed Lee and his 15-year-old girlfriend surnamed Hong on charges of killing their friend at 8:47 p.m. on Monday at Baramsan Children’s Park in Changcheon-dong, central Seoul.

The police said that the victim was stabbed about 40 times in the stomach, neck and back of the head. The police were able to arrest the suspects who were hiding in a jjimjilbang (public bathhouse) in Sinchon after tracing their routes with CCTV footage they secured from the park.

The police said that the four - the victim and Lee, Hong and Park - met each other in an Internet music cafe that shares information on entertainment news and new music releases and maintained their relationships through Kakao Talk, the dominant free mobile messenger application in Korea.

The victim, however, was excluded from the group after the victim and Park broke up. The police said that the three created a new chat room without the victim, which caused Kim to get upset for being excluded. The victim sent several threatening text messages to Lee, which said, “I’ll hack all of your personal information and distribute it on Internet” and “How dare you cut me off from the group?”

The victim also sent messages to Hong urging her to break up with Lee, which Lee took as the victim hitting on his girlfriend. Yoon, the fourth suspect, met Lee through another Internet cartoon costume play club and became involved in the murder when Lee asked him to help.

“The suspects decided to kill the victim because they were angry at messages that the victim sent,” a spokesman of the police said during a press briefing. “The victim also spread rumors to his acquaintances that the three are members of a weird cult that worships ghosts. It made them very angry, leading them to kill the victim in a fit of anger.” The police said that the three were actually members of an online cult club, but were recently kicked out due to a lack of activities.

On Sunday, Lee sent text messages to Yoon which said, “Kim came to Seoul. It’s time to implement our plan.” Yoon prepared weapons including a knife and an iron pipe and called the victim to the park. When he showed up, Yoon hammered the back of the victim’s head from behind and Lee started stabbing the victim.