Forum discusses the logistics of how to fund a unified Korea

Forum discusses the logistics of how to fund a unified Korea 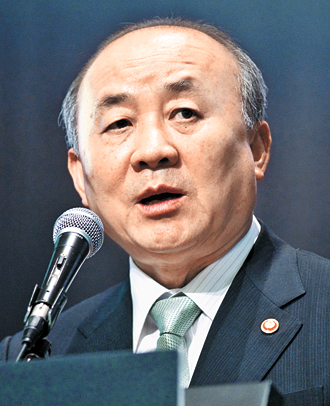 The East Asia Institute, a local independent think tank aimed at boosting research in the Asia-Pacific region, yesterday convened a panel discussion on how to prepare for the unification of the two Koreas.

Marking its 10th anniversary, the institute staged three sessions of open debates attended by a string of high-profile pundits and political commentators on North Korean affairs. The forum was sponsored by the Ministry of Unification and the JoongAng Ilbo.

“South Koreans are increasingly becoming skeptical of unification, especially younger generations who think it is a financial burden,” Unification Minister Yu Woo-ik said in his congratulatory speech. “However, we need to know that despite our surprising economic development and democratization, our activities and visions are still limited by separation.”

The minister emphasized the necessity of fundraising for unification, citing a statistic saying unification would cost at least 55 trillion won ($48.7 billion) per year.

“What I can say clearly here is that the cost of unification is not more than that of separation,” Yu said. “Above all, each person can just pay the cost only once, and that money is mostly an investment.”

Kim Young-soo, executive vice president of the academic affairs department of Sogang University, said there hasn’t been much discussion on the benefits of unification so far.

“We have neglected studying the benefits of unification,” Kim said. “In a unified Korean Peninsula, we would have abundant underground resources and large populations, and also come to rank in the world’s top eight countries within the decade.”

“To draw international cooperation to our unification, we need to build international consensus, convincing other countries that a unified Korea will be contributed to easing security threats in the East Asia region and bring economic benefits.”

Dr. h.c. mult. Hans Zehetmair, chairman of the Hanns Seidel Foundation Korea, also stressed the importance of persuading neighboring countries about the benefits of unification, sharing their experience in the reunification of Germany.

“We also had difficulties in persuading neighboring France that a unified Germany won’t become a threat to them,” he said.