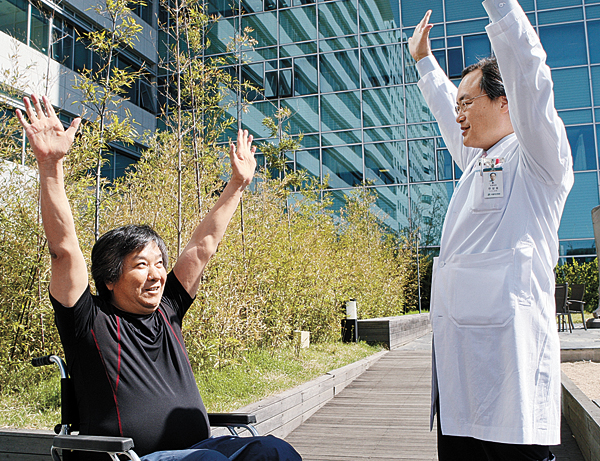 
A 49-year-old surnamed Park was in a car accident 14 years ago on his way to do some night fishing. He was immediately taken to the emergency room and, although he regained consciousness, his body was completely paralyzed from the neck down. He also lost his sense of smell and could only move his fingers slowly up and down.

Park underwent rehabilitation regimens and acupuncture in China but the efforts were hopeless. He struggled to even lift his arms. In despair, Park met professor and neurosurgeon Jeon Sang-ryong from Seoul Asan Medical Center in October 2006. Jeon suggested that he participate in clinical research targeting quadriplegics, or those suffering from general paralysis, using stem cell therapy.

The research ultimately led to a curative procedure.

Doctors collected Park’s stem cells and then grew them until they had 48 million cells and injected them into his injured spinal cord.

The operation took nearly seven hours and Park was put under general anesthesia. After being dismissed from the hospital, he visited the doctor twice every month to get 50 million stem cells injected into the injured area each time.

“Patients with a paralyzed spine like me are sensitive to cold - we shiver even when the temperature is 28 degrees Celsius [82 degrees Fahrenheit],” Park said. “Two days after I received the operation, however, I no longer needed a blanket.”

Also, he was able to smell the scent of toothpaste only a week after he left the hospital.

From 2007, he was able to feel the upper half of his body and lift both arms straight up. He could also send text messages with his mobile phone.

“It’s a miracle that I am now able to eat using a spoon and chopsticks and also hold a glass full of wine,” Park said.

The bottom half of his body, however, is still paralyzed. He said he would like to receive stem cell therapy that would help him recover his numb legs as well.

“We were able to confirm that three out of 10 patients [including Park] suffering general paralysis showed significant recovery after receiving therapy by injecting their own stem cells into their injured spinal cords,” said Professor Jeon.

He said the medical technique will also cure patients with injured necks and backs like Kang Won-rae, a Korean singer whose body was paralyzed from the waist down due to a motorcycle accident in 2000.