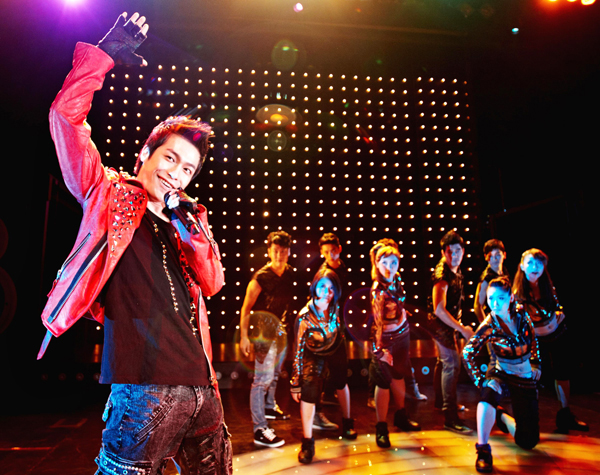 Korean musicals have found great success in Japan, joining the ranks of K-pop and television dramas in spreading the Korean Wave overseas. The Japanese theater market, valued at 1 trillion won (886 million dollars) is the third-largest in the world. [JoongAng Ilbo]


Japanese music fans have grown accustomed to airwaves and album charts dominated by Korean pop groups. A country that used to be fodder ground for J-pop and Western tunes has embraced the Korean Wave, and it shows no signs of abating anytime soon.

Next up for Korean performers is the Japanese theater market, the third-largest on the globe, driven there by a receptive fan base and the chance to make enormous profits. The Japanese musical theater market is valued at approximately 1 trillion won ($886 million), more than five times the figure attached to Korea’s theater world.

Especially in Japan, Korean musicals have surged in popularity as they find widespread success overseas for the very first time. The Japanese have a special love for musicals among Asian nations, as their market is driven by ticket sales to locals rather than to tourists, which is the case in some other countries.

About 10 Korean-produced musicals have already been performed at Japanese venues ranging from neighborhood theaters to grand auditoriums. Some are licensed versions of Korean shows and some have been produced specifically for Japanese audiences, though all are performed in Korean. 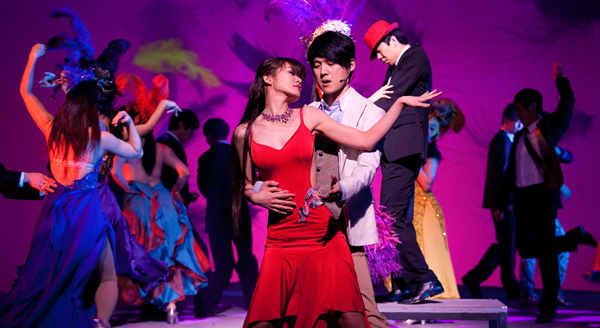 Last year, the two most popular K-musicals were “The Palace” and “200 Pounds Beauty.” These two had a leg up in Japan because a drama and a movie had previously introduced their stories to the country, and this year is set to be even more active.

Riding on last year’s coattails, there has been much fanfare surrounding creative musical “Gwanghwamun Younga.” It is scheduled to be performed in key theaters in Tokyo and Osaka which each have histories of more than100 years.

“When we first staged our musical in Japan, our performing period was very short and our stage was small,” said Lim Young-geun, producer of “Gwanghwamun Younga.” “Also, Japanese production companies would make tough demands on us, such as in our casting. But after they watched our performance, they completely changed their minds. Finally, they recognized that our musical could be competitive in its own right in Japan.”

Korean-style productions have garnered such favor with Japanese production companies that producers have even begun to choose Korean versions of New York productions, rather than importing original works from the United States.

Korean musical “Thrill Me,” a psychodrama based on a brutal kidnapping and murder that takes place in Chicago in 1924, will be performed in July at the Galaxy Theatre in Tokyo, which seats 700.

It saw great success during smaller showings in Japan last year and in March, with tickets selling out on most nights. So a bigger premiere was planned and the musical slightly adapted for Japanese audience. 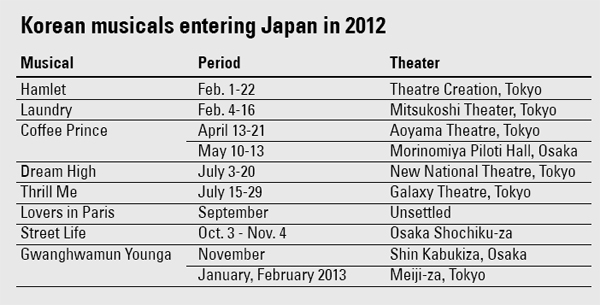 But “Thrill Me” is not originally Korean. It was, in fact, based on an Off-Broadway production of the same name which had its premiere in Korea in 2007. The American version of the story depicts kidnapping and a mysterious and dreamy love between two men.

“The Korean reinterpretation was more persuasive for us,” said an official from the Japanese production company in charge of “Thrill Me” in the country. “The original one from the United States is too detailed, and the abstract nature of the characters in the Korean version allows for more sympathy from the audience. The Korean version also offers a very simple piano accompaniment, something quite new to us.”

As part of the adaptation process to the Japan, some producers pay particular attention to cast members to ensure they will appeal to audiences outside of Korea. For the musical “Street Life,” none of the actors on the Korean stage could be considered household names, but in Japan, the cast includes all members of Cho Shin Sung, or Supernova, one of the most famous Korean idol groups in Japan. Producers for “Gwanghwamun Younga” are in discussion with SM Entertainment about a similar casting arrangement.

Some Korean musicals don’t need to be altered at all before entering Japan. “Lovers in Paris” and “Coffee Prince” were planned from the beginning to be easily transferable to Japan. They will move to Japanese cities directly after completing their domestic runs in Korea. And “Dream High” will skip Korea completely, moving on to Japanese performances before ever taking to professionally-scheduled performances at home.

And regardless of how these productions find their way to Korea, there is one uniting factor this is sure to make 2012 the year of the Korean musicals: money.

“Makers of dramas and films already cover their production costs by selling overseas rights to their works. It is only natural - and perhaps even essential - for Korean musicals to enter the profitable Japanese market.”