BOK is uncertain about economy

BOK is uncertain about economy 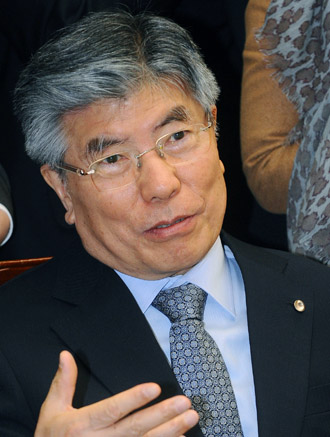 MANILA - Kim Choong-soo, governor at the Bank of Korea, said it was not easy to determine whether the economy is in recovery mode or struggling because economic indices are sending mixed signals.

The comment was made a week ahead of a monetary policy decision on the nation’s key interest rate.

“The Korean economy is in a state where it makes me hesitant to assert whether it has reached bottom or not,” Kim said.

“Last year the economy grew 3.6 percent and this year we expect to expand 3.5 percent,” he said.

The governor said the direction of the economy will likely be determined by how the domestic market does.

“If the domestic economy contribution reaches our expectations then the economy that the general public feels will improve immensely.”

The governor said the economic growth rate is not important.

“It is important whether an economy has reached its bottom or not,” Kim said. “We have to see if the economy is on the path of recovery but at the moment the output gap [the difference between potential growth and actual growth] seems to be slightly on the plus side.”

“China’s growth this year is expected to be 8.1 percent which some say is negative but there are equal number of people who think otherwise,” Kim said. “It remains a variable.”

On inflation, the governor said the public’s expectations of a rise in inflation would continue to be high but that consumer prices would stabilize. However, he added that the stabilization of consumer price lies in the hand of the public.

“If the public’s inflation expectations are not lowered it would be difficult to stabilize inflation,” Kim said. “Such a situation for the central bank is burdensome.”

On the expanded agreement Chiang Mai Initiative Multilateralization, he said the source of Korea’s contribution has not been decided.

“Korea’s portion is $38.4 billion but we have to have more discussion on whether the payment will be all covered from our foreign reserve pool,” he said.

Kim was in Manila Thursday for the Asean+3 finance ministers and central bank governors meeting. Yesterday he left for Switzerland to attend the Bank for International Settlements’ annual meeting.

Kim said Asean+3’s decision on Thursday to expand the Chiang Mai Initiative Multilateralization agreement has opened the opportunity for Asia to have major global influence.

“Europe operates as a single club but the club of Asia has yet to be founded,” Kim said.

Bahk Jae-wan, the Korean finance minister who co-chaired the Asean+3 meeting, said uncertainties in Europe have had a huge influence in expanding the Chiang Mai Initiative Multilateralization.

“There is always the possibility that in the months to come there may be capital outflows from the Asean region,” Bahk said at a press briefing on Thursday.

“We cannot exclude the possibility that the Chiang Mai Initiative Multilateralization would be used,” he said.