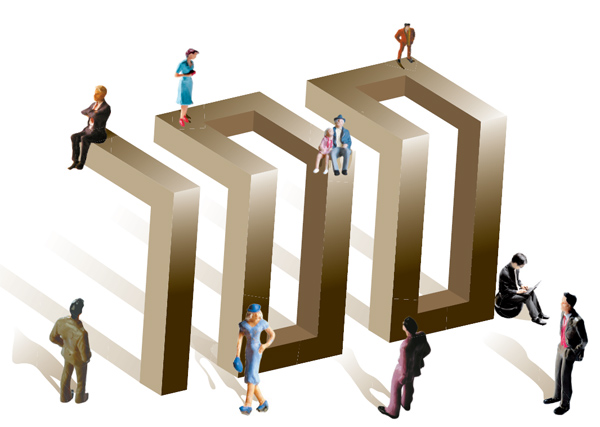 When a 56-year-old conglomerate executive surnamed Kim retired in January, he didn’t worry much about his future, with 300 million won ($265,000) in financial assets.

But when the monthly paychecks stopped coming in and with most of his assets invested in equities, Kim realized he no longer had enough cash to support his family.

“I realized after retirement that it’s meaningless to keep money [in stocks] because I can’t use it instantly,” Kim said. “That’s why I turned my interest to financial products that give me monthly payments.”

Kim cashed in all of his stocks and subscribed to monthly payment financial programs such as equity-linked securities (ELS), which allow him to grow his assets as well as generate the optimum monthly income.

With the wave of baby boomer retirements, the market is seeing a shift toward retirement income funds that provide higher liquidity and significant returns, replacing deposit and installment savings.

Interestingly, the retirement monthly income programs didn’t receive much attention when they first debuted in the Korean market in 2007, but experts said such programs are growing rapidly in tandem with the surge in retirements.

According to Woori Investment & Securities, retirement monthly income funds and ELS have grown into a 9 trillion won market last year, up from 6 trillion won in 2010.
Securities firms anticipate the market will continue to grow at a more formidable speed in the coming years. 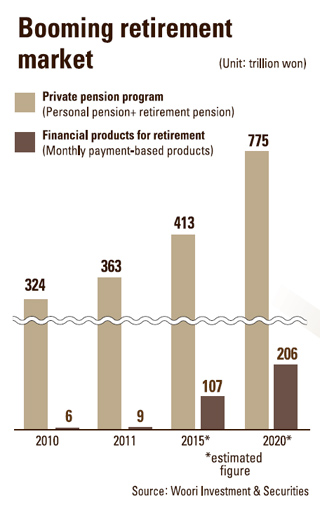 According to research by Woori Investment & Securities, which compared the Japanese financial investment market and aging population with the Korean market, the current 9 trillion won monthly income fund market will increase to 107 trillion won in 2015 and 206 trillion won in 2020.

“The market size of private pension funds alone, which excludes subscriptions in the National Pension Service, will grow to 981 trillion won in 2020 from 246 trillion won in 2011,” said Kim Jin-woong, a researcher at the 100-plus Era Research Center under Woori Investment & Securities.

Korea’s current retirement market is already big with a market value worth 200 trillion won, and financial firms are already in a fierce battle to bolster their positions in the emerging market.

However, some experts have shown mixed reactions to a boom in the retirement income planning market.

“Korean society has been graying rapidly in recent years, but people didn’t see this as a big deal until they saw a surge in baby boomer retirees,” said Kang Chang-hee, head of the Mirae Asset Investment Education and Research Center.

“People now begin to perceive retirement as the reality before them. Where there’s a demand, there’s a business. The retirement business is one of the few growth engines left for financial firms.”

“Institutes on retirements are popping up and this indicates that even financial firms don’t know what to do,” Kim said.

“Consumers shouldn’t solely depend on financial companies but should rather plan their retirement lives independently because investment assets and retirement assets are clearly two different things.”