The Ministry of Knowledge Economy yesterday said it will take stronger measures to crack down on fake gasoline in the country starting May 15.

The new measures include a “one strike-out” system, through which any vendor convicted of selling fake gasoline will have their license revoked. Additionally, vendors who get caught will be prohibited from running a business in the same location for two years. 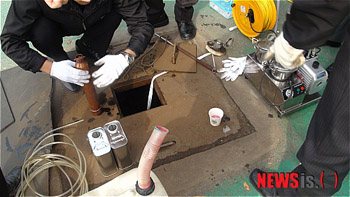 Fake gasoline is made of fuel additives like Cenox that aren’t taxed and cost less than regular gas. They’ve been illegal since 2006, but gain popularity when the price of oil skyrockets. Profit margins are higher for gas stations that sell regular gas.

The government is also set to double the maximum fine from the current 50 million won ($44,200) to 100 million won when gas stations are caught.

The measures were first proposed last October after the government declared an all-out war on fake gasoline. The new measures were announced yesterday at a national policy meeting presided by the Prime Minister Kim Hwang-sik. For the past six months, the Knowledge Economy Ministry has finalized the details.

The government, in cooperation with K-Petro, the National Police Agency and the National Emergency Management Agency, will conduct inspections from May 15 as the new regulations take into effect. The special investigation period will last until June 30.

“It’s important for consumers to know how dangerous it is to use fake gasoline,” said the ministry in a release. “We will work with consumer groups.”