JK Shin, president and head of IT & Mobile Communications Division at Samsung Electronics, introduces the new Galaxy S3 during the 2012 Samsung Mobile Unpack event at the Earls Court Exhibition Centre in London on Thursday. [YONHAP]


Samsung Electronics debuted the much-expected Galaxy S3 smartphone in London on Thursday local time. The new model is armed with a 4.8-inch super AMOLED display, half an inch larger than before, as well as a few other “enhanced intelligence” features including face, voice and motion detection.

The next-generation handset runs on Ice Cream Sandwich, the latest Android 4.0 operating system. It comes a year after the highly successful Galaxy S2, which is estimated to have sold more than 20 million units around the world. The new phone comes with three memory storage options: 16, 32 and 64 gigabytes.

While Samsung had previously been more focused on boasting the world’s top-notch technological innovations, it opted this time for a previously unseen attempt at stressing “human-centered” elements that it claims enhances the interaction experience between the device and the user. 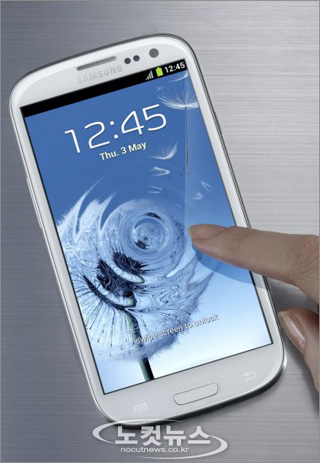 “Galaxy S3 is an entirely new breed of smartphone that has integrated existing technology and human-centered usability,” said JK Shin, president and head of the IT & Mobile Communications Division at Samsung during the presentation at the 2012 Samsung Mobile Unpacked event. “What makes me most proud is that it enables one of the most seamless, natural and human-centric mobile experiences, opening up a new horizon that allows you to live an extraordinary life.”

Its ability to detect a user’s face, voice and motions makes possible the so-called “Smart Stay” feature, the first of its kind in the industry according to Samsung’s claim. Its front camera senses the movement of your face and eyes so the phone’s screen won’t dim or turn off if you are reading an e-book or browsing the Web without touching the gadget for a while.

Also, its S Voice function, comparable to Apple’s Siri, makes it possible to play music, control volume and even launch its 8-megapixel camera - the same as the iPhone 4S’ - and take a photo with a voice command. Shin said it understands eight languages, including Korean and English. Regarding the function, Francisco Jeronimo, a smartphone analyst at market researcher IDC, said, “Overall, [it] seems very similar to Siri, but my first impression is that it is not as well integrated with the phone as Siri is with the iPhone.”

The handset’s motion detection enables the user to immediately call a person who has sent him or her a text message simply by lifting the handset next to the ear with the text messaging window on the screen. That eliminates the step of pressing the call button.

“What’s striking is that Samsung is focusing on software and the experiences more than the hardware, although that is excellent, too,” said Ian Fogg, an analyst at IHS Suppli.

Galaxy S3 has been gathering international attention in recent months as a gadget that could possibly pose a serious threat to Apple’s iPhone 5, whose release date still remains unknown. It is thought to debut in the latter half of 2012.

The global tech king chose to unveil its flagship smartphone in front of the European media in London instead of in its home country. The company is trying to take full advantage of its position as an official sponsor of the upcoming Olympics to gain a bigger foothold in the European market.

The firm said it will have a separate media event in Korea to unveil the device, but the date has yet to be fixed. The Galaxy S3 will be available in the U.K. at the end of this month and in Korea, the United States and Japan in June.

Samsung said the handset will go on sale with 296 carriers across 145 countries.