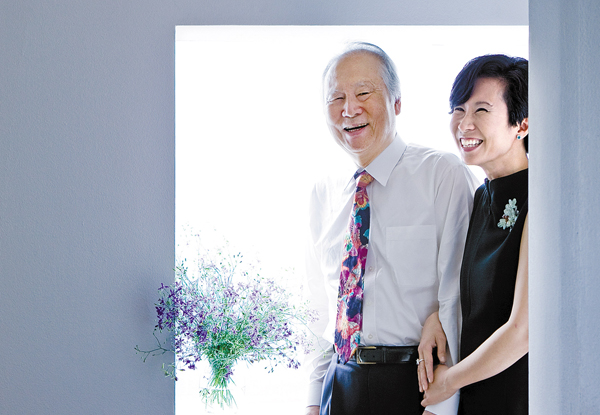 
Known widely for his paintings of Mount Seorak, artist Kim Jong-hak says that after painting, the second-most diligent thing he did in his life was writing letters to his daughter, Kim Hyun-ju.

This month until May 27 at the Gallery Hyundai in Sagan-dong, central Seoul, Kim and his daughter share the handwritten letters that the artist composed over 28 years.

Graduating from the prestigious Kyunggi High School and Seoul National University, Kim said he thought his life would be easily successful. But his career and marriage faced obstacle after obstacle that the artist simply did not anticipate.

The ongoing struggles led him to divorce, and the painter, who is now 75, confessed that when he fled to Mount Seorak in 1979, he did so to get away from his family and art contemporaries.

“I wanted to have no strings attached, to live as I wished, draw whatever I wanted and just be alone,” Kim said.

Still, although he put himself in self-exile, he didn’t cut himself off entirely from his children, who he said he thought about often. Using post-Impressionist Vincent van Gogh as inspiration, he began writing to his two children just as Vincent wrote to his brother Theo.

A letter sent by Kim Jong-hak on Aug. 8, 1991, to his daughter, with drawings of flowers and butterflies. Provided by Gallery Hyundai

Kim wrote on rice paper and even drew with watercolors to show his love for his two children despite the distance between them. Over 28 years, he exchanged about 250 letters.

Out of his children, Kim said he felt more attached to his daughter, who followed in his footsteps by studying painting in the United States. In his letters to her, Kim would often give recommendations of books to read and exhibits to visit.

“I was worried about my daughter, and I thought interacting with her through letters would help maintain our relationship in a healthy way,” Kim said.

Kim’s daughter ultimately decided to share the letters, many of which were addressed to her personally, with the public.

“All the things my father said in the letters were ideas I wanted to share with my own children,” she said. “For this reason, I was the one who suggested sharing the letters with the public.”

Topics covered in the letters range widely from joyous thoughts to explanations of the hardships that come with solo life on an isolated mountain. Being a personal correspondence, the ideas shared are remarkably honest and transparent.

“As your great-grandfather said, to be a genuine painter and poet, one must continuously work, and in fact, this is all one can do after becoming more than 60 years old,” Kim said in one letter to his daughter.

While writing letters to his children, Kim often drew inspiration from the nature surrounding him on Mount Seorak and started to draw flowers, birds, grass and butterflies. In isolation, he grew to became one of the most prolific artists to date in Korea.

Over the years, he painted roughly 4,000 works, well exceeding his original career goal of 100 paintings, - inspired, once again, by his children.

“After I die, I don’t want my children to hear criticisms like, ‘Your father was an insignificant artist who did not have any notable paintings,’?” Kim said. “Therefore, I was determined to live long enough to create at least 100 viable pieces.”