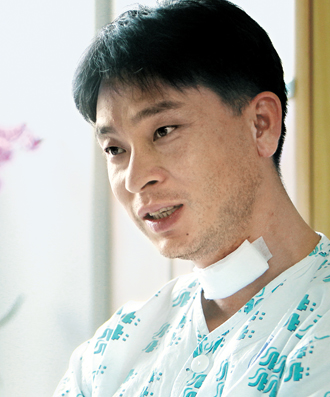 Sgt. Lee Jae-kyeong recalls his encounter with a violent kidnapper who stabbed him in the neck. Lee is currently recovering at Inha University Hospital.By Kang Jung-hyun

In the early morning of April 25, a kidnapper stabbed police officer Lee Jae-kyeong in the throat during a violent tussle in the basement parking lot in Incheon.

“I am still not sure how I was able to arrest the kidnapper after a broken glass bottle penetrated my throat,” said the 39-year-old sergeant, who works at the Seogot Precinct of the Incheon Seobu Police Station. “I still strongly believe that the pride and duty coming from my police uniform and badge empowered me mentally and physically to overcome the thought of my injury.”

On Tuesday, the JoongAng Ilbo interviewed Lee about his valiant efforts and the injury that put him in Inha University Hospital for intensive care.

Still in a hospital gown, the white dressing covering the cut on Lee’s neck was very noticeable during the interview. At first, the sergeant seemed more like a friendly next-door neighbor than a serious policeman. His eyes turned fierce, however, when he started talking about the first encounter with the suspect who would try to take his life.

Police in Seobu received a call at around 5 a.m. on April 25 reporting that a middle-aged man and a young female were arguing. Lee was dispatched to the scene with another officer, and the two officers were almost immediately approached by a distraught woman in her 20s.

“Please help me! I have been kidnapped by this man with a knife,” she screamed. Soon afterward, a man, who would later be identified with the surname Jung, followed with an excuse.

“This is my girlfriend, and I need to bring her back because she has been doing bad things,” Jung said.

Lee admitted that he was confused at first, but his instincts told him what to do and he separated the woman from the man pursuing her because he seemed suspicious.

Then suddenly, Jung sprinted away to the cover of a nearby underground parking lot, probably because the police would soon discover the criminal intent behind his activities.

Lee reflexively chased after the suspect into the dark underground structure. But just as the officer cornered the suspect behind a wall, he smashed a glass bottle over Lee’s head. Moments later, Jung stabbed Lee in the neck, spilling large amounts of blood all over the parking lot.

“My head was spinning after the first hit, and I almost blacked out after getting stabbed in the neck,” Lee recalled in the interview. “I was scared for a moment but soon I realized that this suspect was a merciless brute, and I was determined to arrest this man.”

Lee scuffled with the suspect for more than 10 minutes while bleeding severely.

“I didn’t take the suspect down because I was severely injured. Instead, my uniform and the professionalism it represents fought on my behalf and empowered me to continue the scuffle with the man,” Lee said.

He blacked out only after witnessing the suspect’s arrest by his fellow police officers. When he woke up, he found himself in a hospital bed.

“It makes your hair stand on end when a criminal threatens you by swinging a deadly weapon,” he said. “Once you face the actual situation, however, you regain courage and are able to do your job as a police officer.”