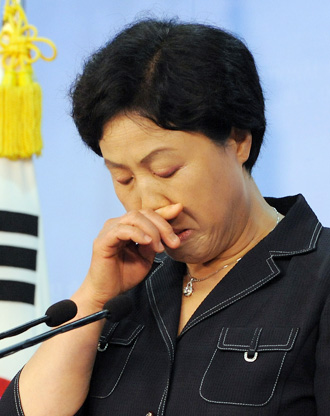 Yoon Geum-soon holds a press conference yesterday to resign as a lawmaker-elect. By Choi Seung-shik

The scandal over the Unified Progressive Party’s rigged primary claimed its first victim as a farmer-turned-politician gave up her proportional representative seat in the upcoming National Assembly.

But the party leadership and five other proportional representative-elects refused to quit their positions.

“As the candidate of the Korean Women Peasant Association, I agree with my group’s position on the rigged primary,” said Yoon Geum-soon, who won the second-greatest number of votes in the March primary. “I will take responsibility. I offer a sincere apology to the public for their disappointment over the sandal.”

In the March 14 to 18 primary, Lee Seok-gi, head of the Social Trend Institute, won the most votes with 27.58 percent, while Yoon, a former chairwoman of the Korean Women Peasant Association, came in second.

Based on the tradition of giving the first place on the candidate list to a woman candidate, Yoon was named first, while Lee was given the No. 2 position.

The Korean Women Peasant Association also held a press conference yesterday urging the entire party leadership and the five other proportional representatives to step down. Of the six UPP proportional lawmakers-elect, three, including Yoon, won the candidacies through the primary. The other three were appointed.

The Korean Confederation of Trade Union, a key member of the UPP, also demanded the leadership to assume responsibility for the crisis. “If the UPP tries to end the crisis with stop-gap measures, we will make the strongest move possible,” the umbrella union said in a statement, hinting at a possible defection of its members from the party.

Despite the snowballing pressure, the UPP leadership, including its co-chairwoman Lee Jung-hee, and the five other proportional representatives-elect resisted calls for them to quit.

At the center of the controversy is the Gyeonggi Dongbu Alliance, which includes Chairwoman Lee and Lee Seok-gi. The Gyeonggi Dongbu Alliance is a regional chapter of the Association for Democracy and Reunification of Korea, established in 1991 by members of the National Liberalization Group, the largest faction inside the UPP. They are mostly former left-wing student activists who support North Korea’s juche (self-reliance) ideology.

The association officially began its political party activity in 2001 by joining the Democratic Labor Party, a predecessor of the UPP. Although the association was dissolved in 2008, the core members of the Gyeonggi Dongbu Alliance gained control over the UPP.

Co-chairwoman Lee has rejected the conclusion of the internal probe into the primary, calling it unfair and irrational. Lee also said she would step down after the party finalized its political timetable on May 12, but protested the idea of creating an emergency leadership.She said that would only make the party drift further for a long time. Other leaders who are not members of the Gyeonggi Dongbu

Alliance fiercely criticized Lee. “Our primary was against the principles of democracy and common sense,” Rhyu Si-min, a co-chairman of the party, said. “If we cannot reform ourselves and create a foundation to communicate with the public, the party’s future will remain in darkness.”

Another co-chairwoman, Sim Sang-jeong, said the party needs to get rid of its secrecy in decision-making and organization. She said its cliquish organizational ways were the hardest challenge for its leaders.

Before the April 11 legislative elections, the liberal alliance between the UPP and DUP faced a crisis after a revelation that UPP Chairwoman Lee’s staffers rigged the primary against her DUP rival in
Seoul’s Gwanak B District.

Although she made a last-minute decision to bow out of the race, Lee did not give up her co-chairwoman position. The entire process, particularly her reluctance to move quickly, hurt the UPP’s reputation and the liberal alliance.

Speculations were high at the time that Lee insisted on keeping her co-chairwomanship of the UPP at the direction of the Gyeonggi Dongbu Alliance.