Koo scores, then shows off his underpants

Koo scores, then shows off his underpants 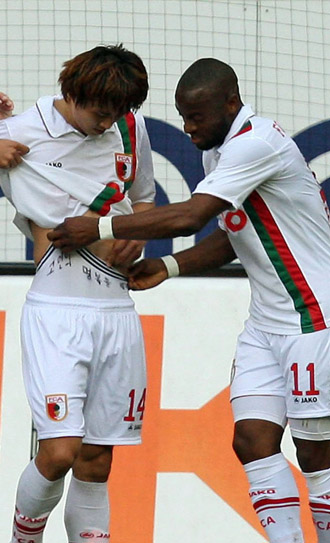 FC Augsburg’s Koo Ja-cheol, left, celebrates by showing off his underwear after scoring a goal during a German Bundesliga football match against Hamburg SV on Saturday. [PENTA PRESS/YONHAP]

Koo Ja-cheol successfully wrapped up the final game of the 2012 German Bundesliga season with a goal that led to FC Augsburg’s 1-0 victory over Hamburg SV on Saturday.

At the SGL Arena in Augsburg, Germany, Koo, who joined Augsburg in January on loan from VfL Wolfsburg, scored the game’s only goal in the 34th minute when he converted a cross from team captain and defender Paul Verhaegh with a header.

It was Koo’s fifth goal of the season and his first in 27 days since he scored against Bayern Munich.

But what caught local football fans’ eyes was his special goal ceremony. After scoring a goal, Koo showed off a message written on his underwear that said, “Pray for the bliss of the dead.” The 23-year-old midfielder later told local media that the message was intended to bestow condolences to some deceased people in Korea.

Koo said that he first prepared the message for three young cyclists of the Sangju City Hall Cycling Team who were killed in a car accident last week and for a local comedian who lost his father last weekend.

Koo also mentioned the ceremony was paying tribute to the first anniversary of Incheon United goalkeeper Yoon Ki-won’s death. Police suspected that Yoon killed himself; some speculated that it was a result of a match-fixing scandal in the K-League,

In the second half, Koo faced compatriot striker Son Heung-min after the 20-year-old entered the pitch in the 65th minute. In the 80th minute, Koo picked up a yellow card for his tackle against Mladen Petric, but his team held on to the lead in the end and collected its last victory of the season.

With Koo’s performance, Augsburg, which was considered to be a candidate for relegation to the second division, will have another shot in the Bundesliga next season.

It was win-win situation for both sides as the 2011 Asian Cup’s top scorer also benefited with Augsburg.

With Wolfsburg under manger Felix Magath, Koo only played seven matches in the first half of the season. However, with Augsburg, the former Jeju United player not only earned much more time on the pitch but had more chances to score.

Koo, who will now go back to Wolfsburg, still has two years left on his contract with Wolfsburg, but the second-half performance of the season is likely to give him a good position for finding a spot with Wolfsburg and also transferring to other clubs.