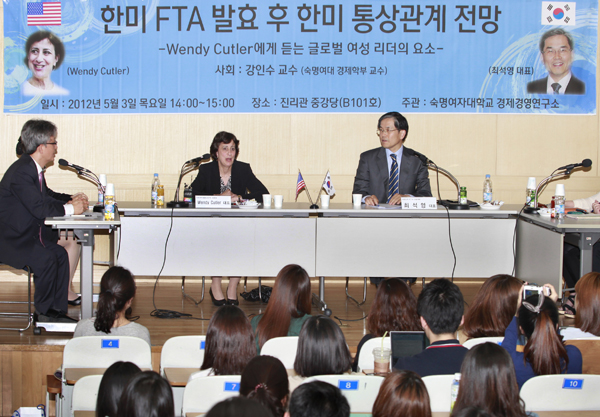 
Amid the reignited controversy over the import of U.S. beef, Wendy Cutler, assistant U.S. trade representative for Japan, Korea and APEC affairs, dismissed any possibility of renegotiating the Korea-U.S. free trade agreement.

Cutler, who spoke at the prestigious Sookmyung Women’s University on Thursday, affirmed that now is the time to focus on how to implement and utilize the Korus FTA rather than talk about renegotiation.

“I am not thinking of renegotiation, but am thinking about the smooth implementation of what we have already negotiated,” Cutler said.

She declined to comment on the recent confirmed case of mad cow disease in California on April 25. A public demonstration at Seoul Square over the weekend was held in opposition to the decision not to suspend U.S. beef imports.

However, Cutler did confirm that Korean and U.S. officials will hold comprehensive talks if controversial issues are raised in order to discuss the problems and come up with solutions.

Cutler is the chief U.S. negotiator who led the six-year-long negotiations with Korea to open free trade since 2006. She is in charge of all U.S. FTA negotiations.

Korean Deputy Minister for Trade Choi Seok-young attended the talk with Cutler to support her. Choi also underlined that it is time to concentrate efforts on the effective utilization of the Korus FTA.

Both negotiators promoted the education of small businesses on the specifics of the FTA, such as how tariffs that affect their products are changing under the trade pact.

“The FTA negotiations were full of difficulties and challenges. But the key is we needed to work together to chart a path forward to solve problems,” Cutler said.

She added that she and her counterpart, Korean chief negotiator Choi Seok-young, were on the same page and worked together to find a way forward.

Cutler also talked about how a woman can be successful as a powerful negotiator. She acknowledged, just as a typical working mother, that it is very difficult to handle both work and home affairs at the same time.

She recalled a memory of one day in February 2007 when a huge snow storm engulfed Washington. Her then-6-year-old son couldn’t go to school because of the weather. There was no option but for Cutler to take her son to a press conference after a crucial round of the Korus FTA negotiations.

“I faced a struggle to be a good negotiator and to be a good mother,” she said, her voice suddenly sounding shaky as she talked about her son.

Bringing her son to the workplace made headlines of daily news outlets, saying Cutler is using a new negotiating tactic. She laughed away while telling students the story.

To become a successful negotiator, Cutler highlighted the importance of listening to others.

“To listen to others and to be respectful are so important. I think one important attribute of a good negotiator is the ability to listen to a trading partner,” she said.

“If you really listen to what their problem is and what their concern is, you will be able to understand them and find a successful resolution,” she added.

The U.S. chief negotiator also urged students to not say “no” and to be positive. She called on the future female leaders of Korea to be “can-do persons” and to always convey enthusiasm about their careers.