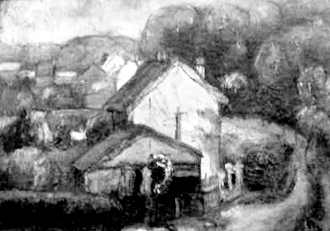 A landscape painting by the first female Western-style painter in Korea, Na Hye-seok (1896-1948), is estimated to have been finished in 1928 when she was visiting Paris. [JoongAng Ilbo]

A landscape painting of Paris by Na Hye-seok (1896-1948), the first female Western-style painter in Korea, was recently unveiled.

Yoo Dong-jun, the head of the Na Hye-seok Memorial Association, said the drawing was at Na Sang-gyun’s house in Buam-dong, northern Seoul. Na Sang-gyun is the son of Na Gyeong-seok (1890-1959), who is an elder brother of Na Hye-seok as well as an independence activist.

Na Sang-gyun said the painting belonged to the granddaughter of Choi Nam-seon, who was a renowned writer during the Japanese colonial period. “My aunt [Na Hye-seok] and Choi were acquaintances ever since they studied together in Japan,” he said. “She gave the drawing to him, and it has been preserved through three generations.”

The drawing is estimated to have been made in 1928 when Na stayed in Paris as part of a 21-month trip around the world with her husband, Kim U-yeong. The 60-centimeter-long (24-inch-long) and 50-centimeter-wide piece is a typical landscape painting of a French village that depicts in detail the surrounding trees and a red-roofed house with white walls.

Kim Yi-sun, a professor of Korean modern art at Hongik University, said he recognizes this artwork from Na’s collection book, but now he can see it in person.

“There is a signature ‘HR’ that she commonly used in her works,” he said.

“Her bold brush strokes simplify the object yet bring it to life, and elements of Fauvism and expressionism can also be found in the piece.”

Na Hye-seok, whose pen name is Jeongwol, is remembered as one of the first women in Korea to study fine arts in Tokyo as well as the first female painter to hold a Western art exhibition in Seoul in 1921. But after a major fire broke out in her atelier, few of her paintings remain today and the originality of those that remain has often been in question.

Na was also one of the first “modern” women in Korea who resisted the feudal patriarchal system. It is well known that she was the first woman who announced her divorce in public.

But Korean society in the early 20th century was not ready to accept her ideas. At the end of her life, she was ostracized, and she met a lonely death in 1948.