Minister: Housing is on the agenda

Minister: Housing is on the agenda 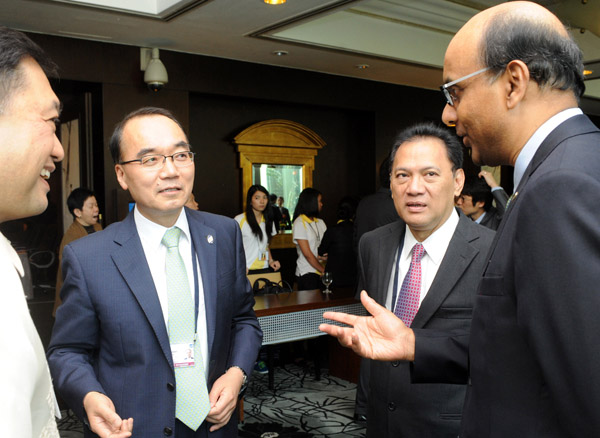 Minister of Strategy and Finance Bahk Jae-wan talks with finance ministers from other Asian countries before attending a meeting with representatives from China, Japan and the Association of Southeast Asian Nations held at the Diamond Hotel in Manila on Thursday. [YONHAP]


MANILA - Minister of Strategy and Finance Bahk Jae-wan said on Saturday that he plans to announce a series of gradual steps later this week to help boost the struggling housing market, though he stressed that the much-discussed debt-to-income regulations would not be revised.

“There’s not much left,” Bahk said to reporters in Manila where he attended the annual Asia Development Bank meeting last week. “So instead of announcing measures that have major impact, like a home run in baseball, we plan on announcing small steps.”

He insisted that “the housing market normalization measures that will be announced will meet the market’s expectations,” but explained that recent discussion has not focused on lifting DTI rules.

“Opinions that the DTI issue should be approached cautiously are most predominant,” he said, warning that any reporting to the contrary is entirely wrong.

The government is expected to release details of the new measures by the end of this week as the finance minister travels to the Middle East to attend an economic summit in the United Arab Emirates.

Bahk also touched upon more general economic issues in Manila, indicating that he agrees with an analysis by Bank of Korea Gov. Kim Choong-soo who said earlier that indicators are mixed as to whether the economy continues to struggle or is on the road to recovery.

“[The economy] is still unpredictable, like the weather in spring,” Bahk said.

This kind of uncertainty exists not just in Korea but around the globe, and there is potential for economic growth that is lower than expected, he said.

“I think this year is going to be a lean year and that the [lowered] outlook by institutions like the International Monetary Fund will be realized,” Bahk explained.

When including the Bank of Korea’s estimates for this year, jobs created in the last five years under the Lee Myung-bak administration amount to only 1.16 million, far lower than the 1.4 to 1.5 million jobs that could have been created if economic growth had reached its full potential. It was significantly lower than the three million jobs promised during the presidential campaign.

And still he stressed that Korea’s job market is not quite so glum when compared to other developed countries.

In the keynote speech at the ADB meeting on Thursday, the finance minister proposed a “3S economy” in Asia to bolster economic growth in the region given these realities. The three fundamentals of his plan are stability, solidity and sustainability.