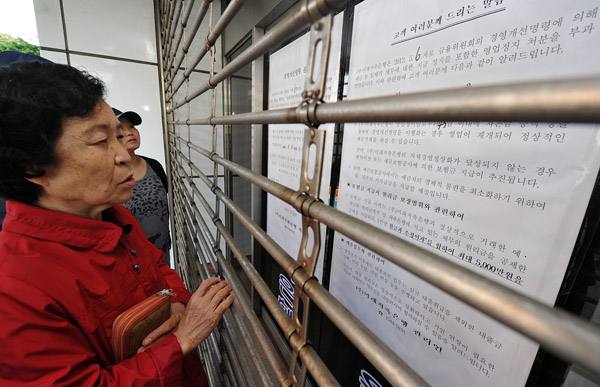 Customers read a sign posted at the entrance of Mirae Savings Bank headquarters in Jeju yesterday. Mirae is one of four savings banks whose operations have been suspended for the next six months. [NEWSIS]


Four troubled savings banks, including the industry’s leader, Solomon Savings Bank, were suspended for risk of insolvency by the Financial Services Commission at 6 a.m. yesterday.

The government regulator announced that the operations of Solomon Savings Bank, Mirae Savings Bank, Korea Savings Bank and Hanju Savings Bank would be frozen for six months and ordered the financial institutions to immediately raise capital.

“Normal operations of the four savings banks will be suspended until Nov. 5, and the banks are required to raise capital within 45 days with an aim of reaching 5 percent in terms of the Bank for International Settlements capital adequacy ratio,” said Kim Joo-hyun, secretary general of the FSC. The BIS ratio is an internationally recognized measure of bank solvency.

Since three of the suspended savings banks - all except Hanju - are among the 10 biggest in the country, the effects of the regulator’s decision are expected to be significant. Solomon is the No. 1 savings bank with total assets of 5 trillion won ($4.42 billion) and 330,000 customers.

According to an examination by the Financial Supervisory Service, Korea, Mirae and Hanju savings banks have BIS capital adequacy ratios of less than one percent, and Solomon has debts that exceed its total assets.

If the banks fail to normalize operations within the given period, the FSC will support selling them to third parties or placing them under government administration at the Korea Deposit Insurance Corporation.

“Shareholders and top management officials at the savings banks will face prosecution if evidence of wrongdoing is found,” Kim said.

The four banks targeted in this third round of closures were among six savings banks that survived shutdowns last September when seven others were suspended or closed. Until recently, they had been under grace periods to allow them to correct the errors of their lax management.

Bank runs began last week ahead of the government’s official announcement last weekend as rumors spread about possible shutdown orders. Around 2,000 customers rushed Friday to the main branch of Solomon Savings Bank in Daechi-dong, southern Seoul, to withdraw their money.

Under the country’s depositor protection law, deposits of less than 50 million won are insured by the government in the event of insolvency and can be returned to their owners with interest returns.

However, those with more than the specified amount in their accounts stand to lose the excess should the banks fail in their restructuring efforts. Across the four banks, the total amount of deposits not protected by the government stands at 12.1 billion won. The number of depositors with more than 50 million won in their accounts at the banks was 8,100 as of Friday, according to the FSC.

During the suspension, those who have not withdrawn their money can receive partial payments from May 10 at about 300 branches of six commercial banks designated by the government: Nonghyup, Industrial Bank of Korea, Kookmin Bank, Shinhan Bank, Woori Bank and Hana Bank. Customers with less than 50 million won in deposits can receive up to 20 million won, while those with more than 50 million won deposited can received up to 40 percent of their original deposit up to the 50 million won mark.

“Deposits under 50 million won are guaranteed protection, so please refrain from rushing to pull out money,” said Lee Seung-woo, president of KDIC.

The biggest victims could be subordinated bond holders at the four savings banks, regulators said.

Solomon and Korea savings banks have publicly issued a total of 206.7 billion won in subordinated bonds, while Mirae has issued 17.9 billion won in private bonds.