Regulators insist that suspensions have ended

Regulators insist that suspensions have ended 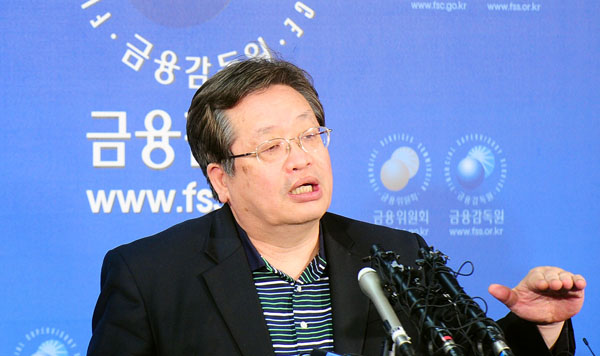 She then advised others around her, including her sister, nephews and children, to make similar investments since no products offered by commercial banks promised similar returns.

Since last year, though, when financial regulators began investigating the nation’s savings banks, Chung decided to keep her distance, even though the amount she invested would have been protected by government insurance should her bank have failed.

“After the financial regulators suspended major savings banks on two separate occasions, I decided to completely pull out from savings banks,” Chung said.

Like many retired people, Chung deposited large amounts from her retirement check after being lured by the interest rates. But she was lucky, removing her money before the suspensions that have rocked the savings bank industry over the last year could inconvenience her. 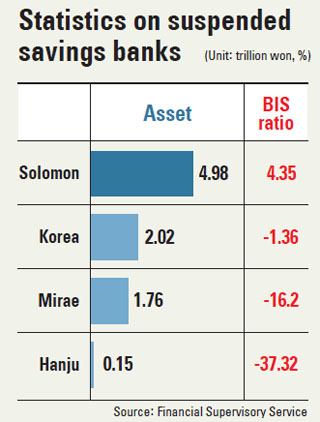 Starting with the suspension of Samwha Mutual Savings Bank, the Financial Services Commission under Kim Seok-dong has suspended 20 savings banks, creating massive confusion among their customers.

Chairman Kim Seok-dong is known as an expert in restructuring. In the past he has led the reorganization of credit card companies with excessive loans on their balance sheets.

The size of the savings banks targeted by Kim have shocked many in the industry; many banks with assets over 2 trillion won have come under the spotlight for risking insolvency.

This is particularly so for the savings banks that were suspended yesterday. Out of the four, three - Solomon, Mirae and Korea - have assets exceeding 2 trillion won. In total, seven out of 20 suspended savings banks have exceeded that asset mark.

Finally though, government regulators assert that the shutdowns have come to an end, and industry insiders tend to agree, citing the strict regulations imposed by the government since investigations began.

“By suspending the four out of six savings banks that were given grace periods for improvements, the government has actually put an end to the restructuring of the savings bank sector,” said Joo Jae-seong, deputy governor at the Financial Supervisory Service, referring to the banks suspended yesterday.

In total, the FSS conducted evaluations of 85 savings banks last year to root out bad debts that resulted from lax management and the reckless issuance of project financing loans by small savings banks.

The financial authority shut down nine savings banks in the first half of last year and then suspended seven more out of 13 savings banks that were told to submit restructuring plans.

The remaining six banks, which included the four suspended yesterday, were provided a grace period to shape up. Solomon, Korea, Mirae and Hanju didn’t restructure in time, but the two others, whose names haven’t been publicly disclosed, escaped suspension.

One of the two successfully carried out its own turnaround plan, while the other one is still making efforts to increase external financing and sell subsidiaries, the FSS announced yesterday.

Joo said the regulator will continue to monitor the soundness of surviving savings banks to prevent a future bank crisis.

What precipitated the crisis

Part of preventing a future crisis is examining what went wrong in the first place and working to prevent the problems from occurring again. The source of the crisis has been closely investigated over the past year.

Problems started during a bearish construction market that pushed profit-hungry banks to issue huge loans with the assumption that the market conditions would allow for repayment.

According to the Bank of Korea, savings banks’ project finance loans in 2010 reached a total of 13 trillion won. These loans surged rapidly as the real estate market heated up in the mid-2000s.

But government intervention in the market eventually caused it to slow down, putting repayment of many loans at risk. The real estate and construction market further slowed during the worldwide economic crisis in late 2008.

Since then, the real estate and construction markets have failed to make a full recovery. While the overdue payment rate for project finance loans was roughly 10.9 percent in 2006, it more than doubled to 22.8 percent by March 2011.

As the real estate market shows no signs of a quick recovery, savings banks, including those suspended yesterday, didn’t have much time to recover through the selling of real estate and other assets, for instance.

Even at the end of last year, there were still 6 trillion won worth of project finance loans on the books, according to the Bank of Korea.

Some worry that additional savings banks could be forced to shut down if they focus on achieving external growth as part of their efforts to normalize their operations.

“Even though the amount of project finance loans has declined these days, they still account for a large portion of total remaining debt,” said an official in the industry. “The construction market is still mired in a prolonged recession, making it difficult for savings banks to get back their loans,” he said.

Government officials aim to highlight the bright spots in the savings bank industry, though, and still insist that the worst is over.

For instance, subsidiaries of suspended Solomon Savings Bank and Korea Savings Bank did not have the same issues with capital as did their parent companies and were able to avoid suspension, according to Joo, the FSS deputy governor.

“Those units will operate as normal if no bank run occurs,” he said.