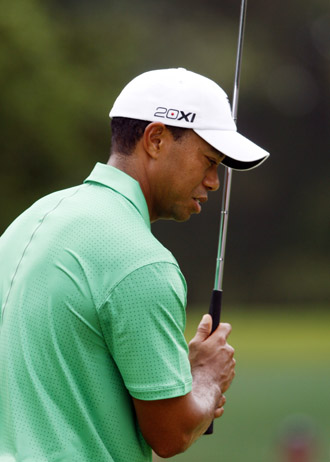 Tiger Woods reacts after missing a putt during the second round of the Wells Fargo Championship golf tournament at Quail Hollow Club in Charlotte, North Carolina, on Friday. [AP/YONHAP]

THE WOODLANDS, Texas - Jack Nicklaus, Arnold Palmer, Gary Player and Lee Trevino got ready for one more round together, but also wondered if they’d ever play with each other again.

The Hall of Fame foursome gathered at The Woodlands Country Club on Saturday to play an exhibition in conjunction with the Champions Tour’s Insperity Championship. Before they teed off, each of them weighed in on Woods’ chances of reaching Nicklaus’ record of 18 major championship victories.

Nicklaus and Player think the struggling Woods can rediscover his game and win more majors. Trevino and Palmer aren’t so sure. “At the current situation, he’s going to have trouble,’’ Palmer said. “That’s my feeling.’’

Woods is stuck on 14 professional majors and he missed the cut at this weekend’s Wells Fargo Championship in Charlotte. The 36-year-old Woods ended a 30-month victory drought with a win at Bay Hill this year, but then had his worst performance as a pro at the Masters last month.

Palmer thinks Woods’ swing has become too technical and he needs to rely more on his natural ability and knowledge of the game. Trevino goes a step further, saying Woods needs to work on his game alone, without advice from a swing coach.

“He’s a little confused in the golf swing right now. Tiger is starting to play mechanically, and Tiger was always a feel player,’’ Trevino said. “What he needs to do is go off by himself, [with] nobody else, and take it out of the ground. That’s what I did, that’s what these three guys did, Mr. [Ben] Hogan did it. All of the old pros used to take it out of the ground, there was no instructor, there was no guru, no sports psychologist and all this other stuff.’’

Woods’ last major victory came at the 2008 U.S. Open at Torrey Pines. He had left knee surgery shortly after that, and his personal life sank into scandal at the end of 2009. He started working with new swing coach Sean Foley in 2010, but he acknowledged on Friday that he still reverts back to what former coach Hank Haney taught him.